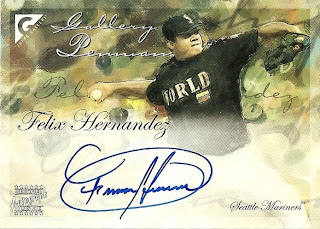 Yes, I realize that Felix's deal was finalized over a week ago, but I had to wait (it only took about 14 days) until I received this card to use the word "inks" in the title for this post (I was legally obligated by the MLBPA). I never used the phrase "breaking news" did I?

As a Mariners fan, this is probably the best offseason since we signed Richie Sexson and Adrian Beltre (slaps forehead). Another season of Griffey Jr. and Felix staying with the team through 2014--yeah, it's a good time to be an M's fan. Throw in Cliff Lee and Chone Figgins, and heck, Seattle might even be a playoff contender this season.

The card itself is my first King Felix auto and one of my new favorites of the most talented 23-year-old in the game. The card comes from an insert set out of 2005 Topps Gallery titled "Penmanship". Hernandez has one of the best autos in baseball and the blue ink really pops off the card because of the muted colors in the background. The fact that the autograph is on-card just seals the deal for this sweet card. This one's staying with me for a long time (or until he's traded to the Yankees).
Posted by The Notorious B.U.D. at 11:27 AM