Back in the Game: A Trade with Night Owl

It had been a very long-time since I had received a trade package in the mail so I was thrilled to find one last week from the dean of baseball card blogs, Nightowl. As always, he came through with a great mix of Mariners both old and new. Here are some of my favorites: 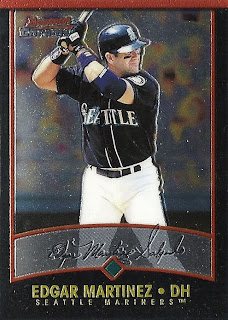 2001 Bowman Chrome Edgar Martinez: Edgar didn't make any headway on his journey towards Cooperstown this year but I remain optimistic that one day he will receive the credit he deserves for a tremendous career. 2001 Bowman Chrome is one of my favorite Bowman designs and my little brother will be thrilled to add another great Edgar to his binder of one of the M's most beloved players of all-time. 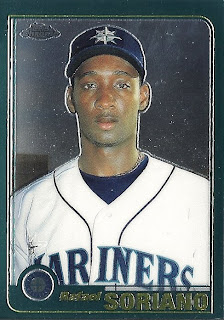 2001 Topps Chrome Rafael Soriano: This card is another stinging reminder of how incompetent the Mariners' front office used to be (I think they're better now, but I would like to see some results on the field). Rafael Soriano was a stellar reliever for Seattle before Bill Bavasi decided to send him to Atlanta for Horacio Ramirez (slaps forehead). Long story short, Soriano has been even better since and Ramirez posted an ERA north of sevent (7!) while in Seattle. Yeah, we came out ahead on that one. 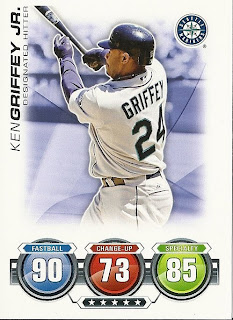 2010 Topps Attax Ken Griffey Jr.: Ken Griffey Jr. didn't attack much of anything besides the team buffet last season, but I'm always happy to add another new card of the Kid to my collection. I saw Griffey in a Nike commercial the other day and forgot for a second that he's retired. It still hurts. 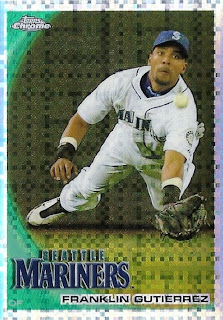 2010 Topps Chrome Franklin Gutierrez X-Fractor: Franklin "Death to Flying Objects" Gutierrez was one of the lone bright spots for Seattle in 2010 and I'm hoping he takes a step forward at the plate in 2011. Speaking of bright spots, there all over this card! AHHHHHHHHHH!

Thanks for the great cards Night Owl!
Posted by The Notorious B.U.D. at 3:07 PM 1 comment:

Got this box wicked cheap on eBay (about 1/2 price) so I didn't have very high hopes of pulling a big hit. That's good, because this year's BDPP is built to disappoint, and there were only two cards worth showing: 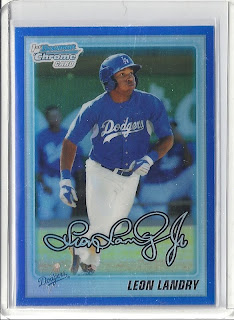 Leon Landry Blue Refractor #136/199: This might not be a big money hit but it is one terrific looking card (I love me some blue refractors). Leon Landry was a third round pick of the Dodgers and had a great first year in pro ball, hitting .349 with 4 HR's, 38 RBI's and 13 SB's for rookie league Ogden. It's worth holding onto, but if I decide to move it, it's headed your way Night Owl. 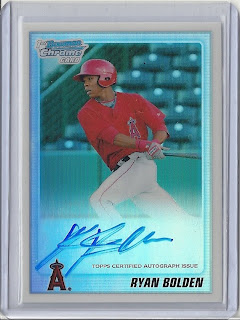 Ryan Bolden Refractor Auto #237/500: Well that sucks. Not only does Ryan Bolden have one ugly autograph, but he also happens to be one of the worst (if not the worst) players in the set. Yet another 1st round pick of the Angels Bolden hit a paltry .187 at rookie league Arizona with no HR's and a 14/68 walk-to-strikeout ratio. Not counting on this to make me any money.


Overall Thoughts: I can't complain about what I pulled because the box was so cheap, but that being said, this one was a real stinker. '10 BDPP is a huge gamble by the box and while it may pay off on occassion more often than not it will leave you feeling hollow inside. I should take my own advice and stick to singles...
Posted by The Notorious B.U.D. at 11:48 PM 1 comment:

National Chicle was a dumpster fire for the most part (everyone remembers the Tim Wakefield "painting") but there were a few bright spots, not the least of which was this great looking relic of Yankee's all-time great Whitey Ford. I love that the jersey shows it's age and the pinstripe is a nice cherry on top. Pulling this card is nice motivation to go out and get a Babe Ruth or Mickey Mantle game-used jersey...easier said than done of course. I hate the Yankees but I do love history. Thanks for looking! 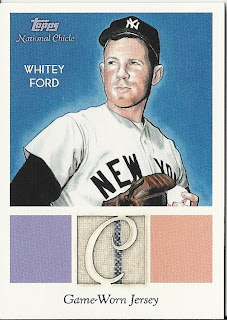 Another Reason My Girlfriend is the Bee's Knees

I was walking through Target with my girlfriend the other day and she decided to accompany me to the card aisle (she's a good sport). I asked her to pick out a blaster of Bowman Platinum for me and she chose a winner. Here's what I pulled: 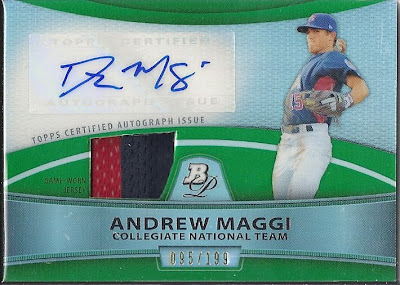 I purchased three boxes of 2010 Bowman Draft from Blowout Cards with Christmas cash that I got from some relatives. I've had good luck in the past with this product and I was hoping it would continue with the 2010 edition. It did not. Here's the hits: 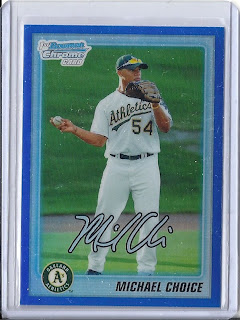 Michael Choice Blue Refractor RC #36/199: The first time through these boxes I missed this card. I have no idea how because it has a bright blue border and I carefully sort through each pack. Still, it was a nice surprise after I thought I had found all the hits from my break. It's a great looking card and Choice is a top prospect, so I'm happy with this pull. 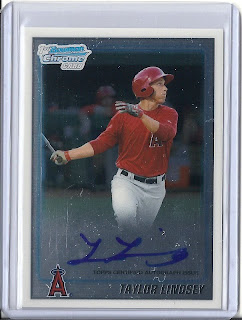 Taylor Lindsey RC Autograph: Taylor Lindsey was one of four 1st round picks for the L.A. Angels in the 2010 draft and had a decent first year in pro ball, hitting .284 in 194 AB's for the Angels' rookie league team. His cards don't sell very well right now, but the nice thing about this product is that you often don't know whether your cards are boom or bust for another 2-3 years. It allows me to delay the disappointment for a bit... 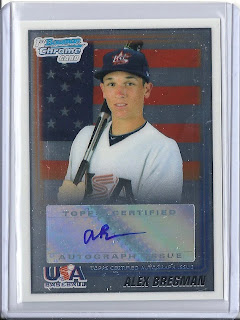 Alex Bregman USA 16-U RC Auto: A new addition to Bowman Draft this year is the inclusion of autographs from the 16 and under squad of USA baseball players. They fall about 2-3 per case, and while I find it a bit weird to pull a card of someone who is not out of high school yet, I'll never complain about an extra hit. Bregman was one of the top players on the squad and hopefully in a few years this card will be worth it's weight in gold...which would be like $2.00. 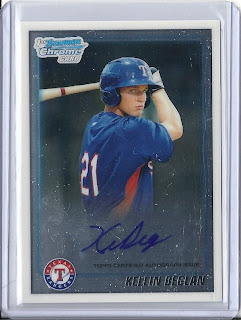 Kellin Deglan RC Autograph: Kellin Deglan is a catcher out of Canada who was drafted by the Texas Rangers in the first round of the 2010 draft. He struggled in his first year of pro ball hitting just .191 between the rookie league and Spokane (go Indians!) but at age 18, there is plenty of time for him to develop into a star. 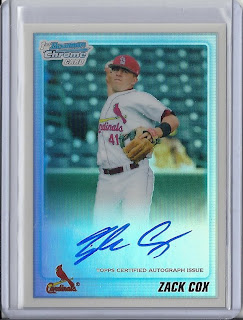 Zack Cox RC Refractor Auto #/500: The best hit of my three boxes, Zack Cox was drafted by the Cardinals after starring for two years as a third baseman for the Arkansas Razorbacks. The auto refractors in this set look great as the signature really pops off the card. While Cox may turn into the next Ryan Braun or Ryan Zimmerman, there are some concerns about his ability to translate to the pro game, so I already sold this off while his stock is high.

Overall Thoughts: Althought I like this product, 2010 Bowman Draft is printed in much higher quantities than the 2009 and 2008 versions, and thus it is much more difficult to pull colored refractors. The expanded autograph checklist is nice, but it also makes it harder to pull autos of the top prospects like Manny Machado and Jameson Taillon. The design isn't bad, but it isn't nearly as nice as 2009 Draft (still my favorite of the last three). I might get a few more boxes if the price is yet, but unless you can afford to buy a case (can't we all?), singles is the way to go.

1) Less retail, more hobby. I don't even want to think how much I spent on blasters and value-packs in 2010. While I have some nice hits to show for it, hobby would have provided quite a bit more bang for the buck. I think I need to start avoiding Target all together.

2) Complete the 2009 Bowman Draft Michael Saunders Rainbow (need x-fractor and superfractor). The x-fractor is #/199 yet I haven't seen one on eBay in months (no luck on COMC either). I would be happy to pay a nice bounty in cards if someone can track this down for me.

5) Trade more with fellow bloggers. I know I've let you all down.

6) Send in cards I don't need/want to COMC to trade for cards I do want.

7) Pull a printing plate from a pack. This one might be difficult.
Posted by The Notorious B.U.D. at 10:34 PM No comments: