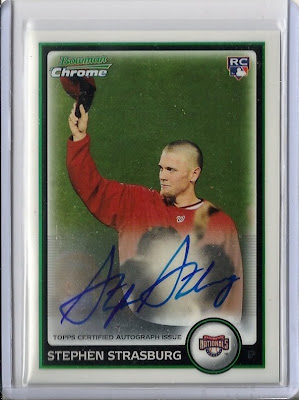 This card is my first and likely last foray into the world of Strasmania. I bought this card as redemption a few months ago in the hopes that the live card would be shortprinted. Sure enough, only 99 of the variation autos were produced, and demand spiked markedly after the announcement. I was thrilled when I heard the announcement, as I would be in possession of Strasburg's most rare rookies, but much less so when the card showed up in hand. Some people complained about the design of the card (including Strasburg's haircut) but that's really not what bothered me about this card. What bothered me is that card that came directly from Topps could show up in such crummy condition. Not only is the centering atrocious (70/30 on the front and 80/20 on the back) but the surface shows numerous dimples, scratches and other imperfections. I understand how a card can be damaged in the packing out process (not that I'm absolving Topps for their crappy QC) but a card that is sent directly to me...that's just inexcusable. I was hoping to save this card until Strasburg returned in September or next season but I was so disheartened by the condition of the card that I just sold it on eBay and used the profits to buy a nice Ken Griffey Jr. card (stay tuned for that) from Upper Deck. Thanks again Topps. This monopoly is working out well for everyone.
Posted by The Notorious B.U.D. at 11:19 PM No comments:

Retail stores (in this case Shopko) carrying hobby boxes could prove to be the death of my bank account. I got another box of 2009 UD Signature Stars as a birthday present to myself and although it looked bleak heading into the last few packs, it turned out to be a pretty good break. Here's what I pulled: 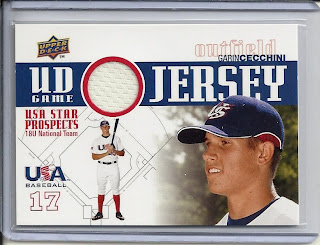 Garin Cecchini USA Jersey: Garin Cecchini was a fourth round pick of the Boston Red Sox (who else?) out of high school in 2010 after being rated as one of the top hitting prep prospects available. There's probably more info about him available online but it's late and I don't care enough to look for it...a thousand apologies. 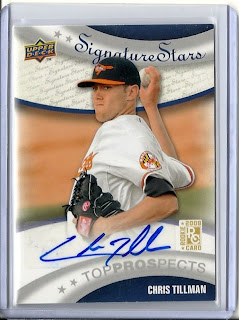 Chris Tillman RC Auto: I've always rooted for Tillman because he's a former Mariners' prospect even though he was part of the ill-fated Erik Bedard trade (which doesn't quite seem as bad today as it used to). He's had a decent spring training and hopefully will put it all together in 2011. I could see the Orioles surprising quite a few people this season and their young starting pitcher will be a major reason why. 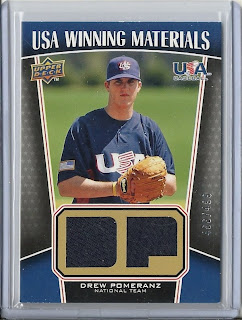 Drew Pomeranz Winning Materials #/499: Pomeranz was the ace of the Arkansas Razorback staff and was drafted 5th overall by the Cleveland Indians in last year's draft. The Indians hope Pomeranz is the next Cliff Lee but only time will tell. He signed to late to pitch in 2010 so no stats to speak of...sorry. 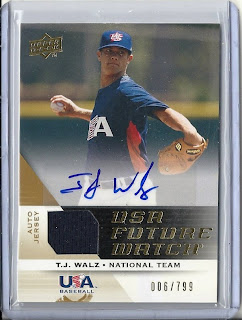 TJ Walz USA Jersey/Auto #6/799: T.J. Walz is a senior pitcher at Kansas who currently has a record of 2-3 with a 4.88 ERA and 31 K's in 31 innings. I don't have particularly high hopes for Walz as a professional (although I hope he proves me wrong) but I do love the design of the USA Future Watch cards. The sticker blends right into the card and the large photo is a big plus. I might have to find a player from this set to collect. Sonny Gray? Gerrit Cole? Bryce Harper? 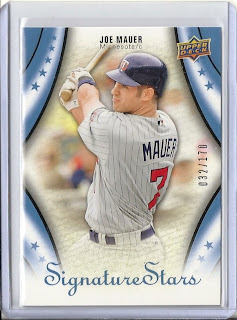 Joe Mauer Sky Blue Parallel #32/170: Though underwhelming, the blue parallels are a tough pull at about one in every other box, and one day will be sold by Burbank Sportscards for ridiculous amounts. I was awfully happy to pull one of a great player and someone that I collect. WINNING! 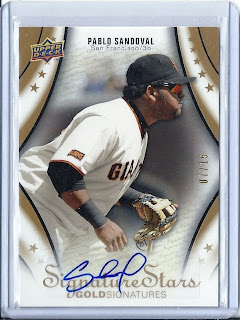 Pablo Sandoval Gold Signature #7/15: The box had been pretty mediocre until one of the last few packs when this beauty popped out. Technically this set is from 2009 (even though it wasn't released until 2010) making this one of Pablo Sandoval's most difficult rookies to track down. This card nearly paid for the box by itself and I certainly won't complain about that.

Overall Thoughts: I had quite a bit of fun busting this box once again, and even though I didn't pull a phenomenal looking Pride of Nation auto or a Bryce Harper, I was awfully happy with the results of my break. At the right price I certainly wouldn't hesitate to bust another box of this. Thanks for looking!
Posted by The Notorious B.U.D. at 8:52 AM 4 comments:

In honor of of the incredible accomplishment that is my 24th birthday (I think I'm being sarcastic, but I'm not sure) I proudly present some of my favorite cards of the greatest #24 ever (yes I know he isn't wearing #24 in all of thse cards, deal with it) Mr. Ken Griffey Jr. Feast yo eyes on the following: 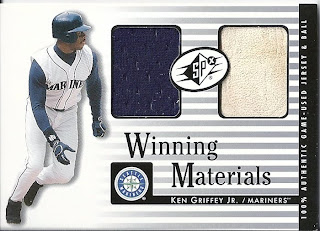 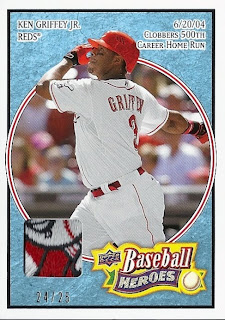 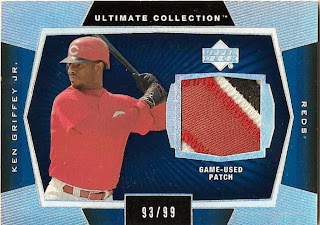 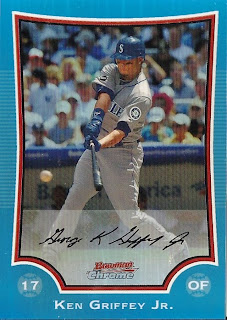 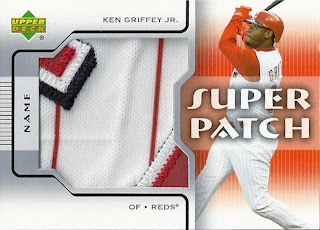 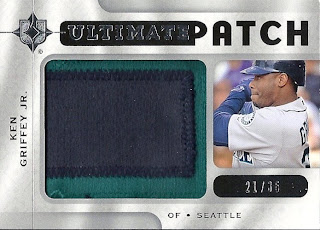 There's more, but I'm too lazy to scan them right now. It is my birthday after all. Thanks for looking! Stay tuned for some birthday box breaks coming soon! 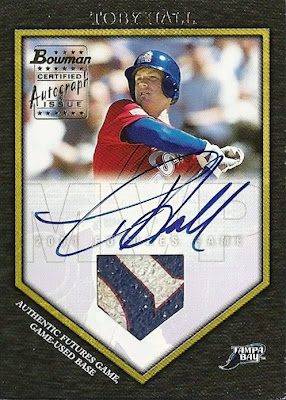 I didn't envision a day when I would feature Toby Hall as the card of the week, but I also didn't imagine I would find a Toby Hall card quite as cool as this one, for as cheap as I got it ($3 including shipping). The card features an on-card autograph of Hall (who I always had a soft spot for because he's from Washington) and a multi-colored swatch for a base used in the 2001 Future's Game (of which Hall was the MVP). I couldn't find a picture of the base used in the game, so I don't know exactly where the swatch comes from, but there is something cool about avoiding the dreaded white swatch. Cards like this make me miss the days when manufacturers put more game-used items in cards than just jerseys. Hopefully, they will once again return to those halcyon days. Thanks for looking!

Tax season is a great time for those of us who don't make much money (cough Bud cough). The government sent me a decent chunk of change for my year of not making much money and I decided the most American thing to do with my new found wealth would be to buy some baseball cards. After much deliberation I settled on a favorite, 2009 Bowman Chrome. A low price, lots of shine and a few decent autos in the checklist...who could ask for more? Here's what I pulled: 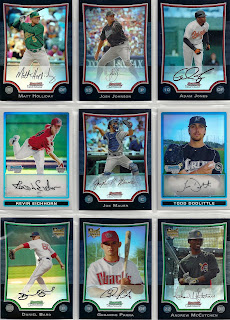 Holliday/J. Johnson/A. Jones/Eichorn/Mauer/Doolittle/D. Bard/Parra/A. McCutchen: The regular refractors fall about six per box (there are plenty not pictured--no offense Scott Olson. Actually offense, I really don't like you) and I was happy to pull two PC players (Josh Johnson and Joe Mauer) as well as a handful of decent "RC" logo cards. The prospect cards are numbered to 500 and fall about one per box. Kevin Eichorn looks like a decent prospect (lots of strikeouts) although Todd Doolittle was born in 1982 so I'm not holding my breath on that particular card. 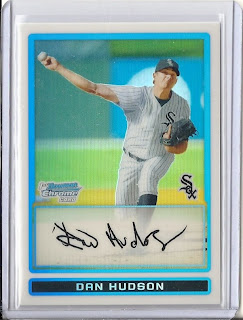 Dan Hudson RC Refractor #230/500: Besides Starlin Castro (who seems to be a case hit in this product) Dan Hudson is the top prospect in 2009 Bowman Chrome (he utterly dominated the NL after being traded to Arizona) and I was thrilled to pull a refractor of his true rookie card. If he continues pitching like he did at the end of last season this will probably be worth more than all of the autographs from this break. 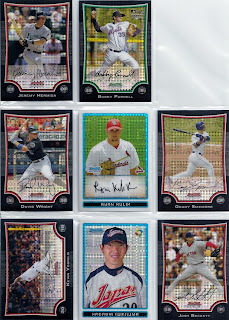 Hermida/Parnell/Wright/Kulik/Sizemore/Youkilis/Takahashi/Beckett X-Fractors #/250: X-Fractors fall about two per box and I pulled a decent crop of players (the Sizemore is just one serial number away from his jersey number) although I would have liked more prospects in the mix. I love these cards and was awfully disappointed that Topps did away with them in 2010--they add quite a bit of value and fun to each box. Hopefully they'll bring them back soon, although for the initial reports, it doesn't look like they'll show up in 2011. 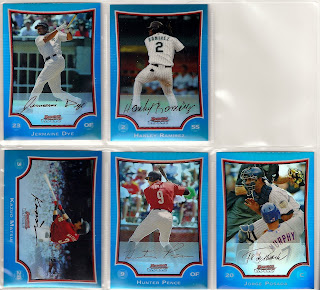 Jermaine Dye/Hanley Ramirez/Kazuo Matsui/Hunter Pence/Jorge Posada Blue Refractors #/150: Blue refractors fall roughly one per box (although Matsui and Ramirez both came in the same pack) and look just terrific in person. I've said it before and I'll say it again: if I had the time and the money, I would definitely attempt to complete this set. In fact, maybe I'll start now... 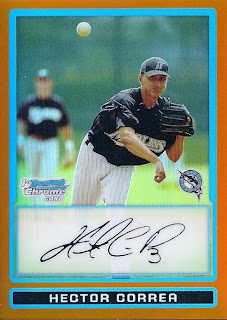 Hector Correa Orange Refractor #9/25: I was pretty happy to pull an orange refractor until I realized that Hector Correa (who projects as a solid middle reliever) also had a "1st Bowman Chrome Card" in 2008 Bowman Chrome. That makes very little sense to me. I understand the whole "RC" logo thing, but not back-to-back first year cards. Thanks Topps. 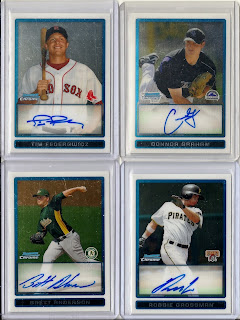 Tim Federowicz/Connor Graham/Brett Anderson/Robbie Grossman Autos: I went into the break hoping for an auto of Freddie Freeman, Carlos Santana, Dayan Viciedo or Tommy Hanson. Unfortunately, I was shut out and left with three scrubs and one solid auto (Brett Anderson). Thankfully, there is much more to these boxes than just the autos (something you can't say about Bowman Draft) including the following card: 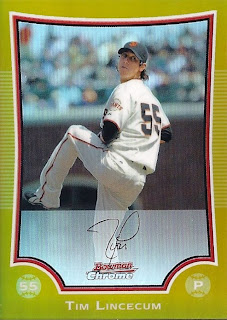 Tim Lincecum Gold Refractor #20/50: Wow! I was excited when I opened a pack and saw that I had struck gold and downright ecstatic when I realized I had hit a great card of the terrific Tim Lincecum. This card is a real peach in person and even though Tim isn't a Mariner (although he could have been...ehhhh) I think I will keep this one in the PC for a while.

I love this product and would highly recommend it to anyone looking for a cheap, shiny break. Thanks for looking!
Posted by The Notorious B.U.D. at 9:03 PM 4 comments: 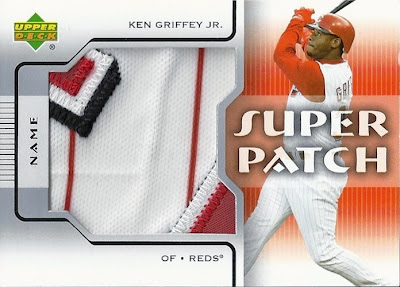 I won this beauty in a hotly contested auction on eBay last week and couldn't wait to show it off. There's quite a few nice Griffey patches on eBay, but the majority of them are set at ridiculously high Buy It Nows, so I wasn't about to let this one get away when it came up for auction. The super patches from 2004 Upper Deck fell at 1:7,500 packs and this particular card is short printed to just 15 copies. Needless to say, it will be a centerpiece of my Griffey collection for a long time, and is a card that I hope to one day pass on to Bud Jr. Thanks for looking!