Since I didn't really get any baseball cards for Christmas (except for a sweet "card" from my girlfriend which I will show later) I decided that my X-Mas cash would best be spent on a few hobby boxes of cards. Was there really anything else I could do with it? I perused the big name sites (Dave and Adam's & Blowout Cards) before discovering a hidden gem of the collecting world, Atlanta Sports Cards. While they don't have the same selection of the bigger sites their holiday prices were tremendous and my little brother and I each got two boxes of 2003 Flair ($30/each) and two boxes of 2007 UD Masterpieces ($35/each). If we had been doing pack wars my brother would have kicked my butt (more on some of his pulls in a later post, including a case hit) but for the amount of money I spent, I was fairly happy with what I got. There's nothing extremely special about 2003 Flair, the base cards are decent and there really aren't any inserts, but I really got the box because it promised four game-used cards plus one jumbo game-used card for only $30 bucks. How could I possibly go wrong? Well, take a look and find out: 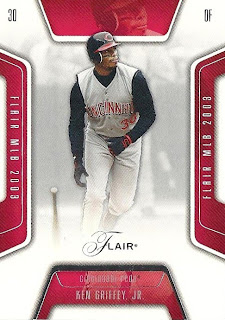 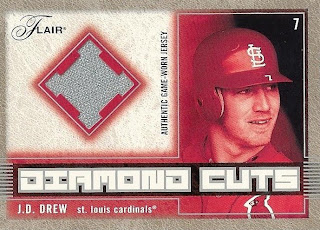 J.D. Drew Diamond Cuts Game Used Jersey: I would equate pulling a JD Drew jersey card to jamming a finger. It hurts like hell and the rest of your day is ruined. Eff word. 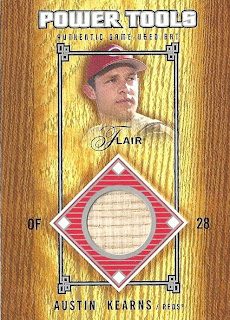 Austin Kearns Power Tools Game-Used Bat #301/500: If J.D. Drew is like jamming a finger than Austin Kearns is a paper cut that gets infected. Seriously, this box is jammed full of unfulfilled potential and broken promises. Cue the emo music! 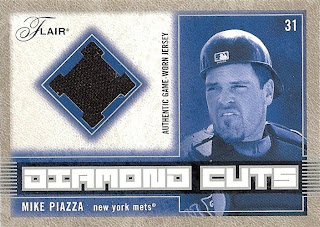 Mike Piazza Diamond Cuts Game-Used Jersey: It's always nice to pull a non-white jersey swatch, and this black piece of Mets jersey was a nice surprise. I guess Piazza is considered a star player, although in his photo on the card it looks like he just smelled one of Al Leiter's farts. I didn't watch much Mets baseball (thank God) but that looks like classic "Piazza Face" to me. 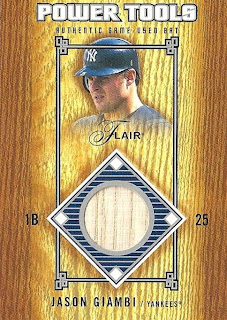 Jason Giambi Power Tools Bat Card #300/500: I was really excited when I first pulled this because I thought it was a Derek Jeter. No, it's just a guy with lumps on his organs from steroids. I like the design of the card and bat chips are a nice change of pace from the dreaded white jersey swatch. The "Power Tools" name seems very fitting for someone like Giambi. 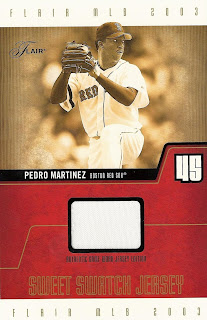 Pedro Martinez Sweet Swatch Jumbo Jersey #150/1480: I guess this is the big hit of the box, although more physically than financially speaking (the actual card is about 5" x 8"). I really feel like this card was designed for old people with large type on the back and the oversized design...it's just like a large print novel of the newest Agatha Christie mystery. I always like getting box-toppers and I won't complain about a decent sized chunk of jersey, but 1,480 seems like quite a big number of pieces to get from just one of Pedro's jerseys (at least during his slender days). There were also oversized patches and autos to be pulled from the set. Instead, I got this. Oh well, at least he's a future Hall-of-Famer.

While I might not have pulled the greatest cards from this box it was still a lot of fun to open and it's tough to beat five hits for $30 (I just had some bad luck). I would certainly consider buying another one of these boxes in the $30-$40 dollar range, although I'm sure they won't be getting any easier to find. If you see any cards you would be interested in just let me know (budbareither@gmail.com). Thanks for tuning in, I've been great!