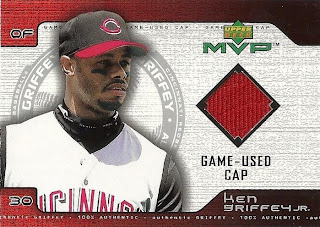 This was one of the most difficult Ken Griffey Jr. memorabilia cards that I've tracked down to date and that really showed in final price. I paid nearly as much for this card as I did for a beautiful 2003 Ultimate Collection Patch numbered to 99. Still, I was happy to get this card no matter what the cost, because Griffey game-used hat/cap cards show up on eBay less frequently than Sidney Ponson at a gym. The only other Griffey hat I have seen was from 2003 UD Vintage and was a bit out of my price range since it was numbered to only 25 (it wasn't a great looking card either).

It looks like a normal swatch of jersey from a distance but up close you can tell it's a hat swatch and the material feels like the bill of ballcap. I can only hope that Junior wore this hat backwards as was his trademark with the Mariners. Another great card and another step closer to everything Griffey. Next stop, game-used glove?
Posted by The Notorious B.U.D. at 10:58 PM