A Nice Swap With My Favorite Nocturnal Bird

It was just over a year ago that I made my first trade with the aforementioned Night Owl, which eventually got me plugged into this crazy and wonderful thing called the baseball card blogosphere. I've completed a handful of trades with Night Owl and each one is as thoughtful as the last. Here's the latest bunch: 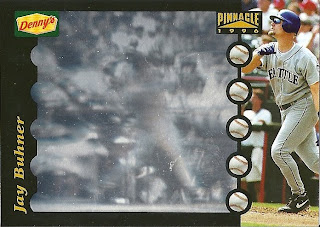 1996 Denny's Hologram Jay Buhner: Since going retro is cool again (see every Indie person ever), isn't about time that Topps brought back the hologram? I'm sure the technology exists to make them even better looking than in 1996, and it sure would be a pleasant escape from yet another vintage themed insert set. Also, I miss Jay Buhner. 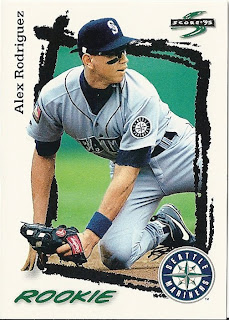 1995 Score Select Alex Rodriguez "RC": Yeah, I said it. I'm an Alex Rodriguez fan. Well, at least when he was with the Seattle Mariners I was, although I wasn't totally disgusted to see him win a World Series last year. I wonder if he will come back to Seattle for a reunion tour a la Ken Griffey Jr? 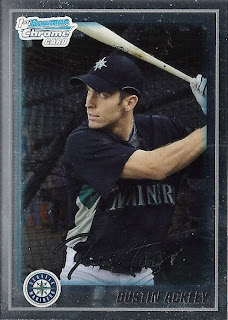 2010 Bowman Chrome Dustin Ackley RC: Dustin Ackley was the player drafted directly after Stephen Strasburg (yes, I know how dumb the M's were to not lose one more game) in last year's draft, so while it's easy for him to be overshadowed, he's been putting together a solid minor league season after a slow start. He looks like he might be right to start at second base in 2011, which would allow Chone Figgins to move back to third and maybe remember how to hit. 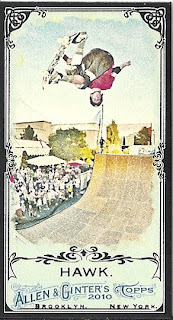 2010 A & G Tony Hawk Black Border Mini: Although I was a BMX'er growing up, I still idolized Tony Hawk and spent countless hours of my life playing his very fun video game. This is a great looking card from one of my favorite sets and the impetus for this whole trade.

Thanks for the great cards Night Owl. I've got a feeling there will be a few more trades between us in the future.
Posted by The Notorious B.U.D. at 10:56 PM