With football season just around the corner and the New York Jets gaining nationwide attention on "Hard Knocks", I figured that the time was right to admit, that yes, I am friends with Mark Sanchez.

Now you may be asking yourselves: how does a small-town boy become friends with a quarterback of one of the biggest and most popular programs in all of college football? Good luck I guess. One of my best friends in college went to high school with Mark and whenever the Trojans played in the Northwest (Seattle, Pullman and Corvallis) we would make the trek to see Sanchez and U.S.C. blow their opponents out of the water.

The first time I met Mark he was serving as back-up quarterback to John David Booty (where art though now?) at a University of Washington game. After a surprisingly close USC win, Mark hung out with us for about 30 minutes, laughing at my jokes ("Have you heard about the corduroy pillows? They're making headlines!) and sharing some of the team pizza and gatorades with us. He was incredibly down to earth, friendly and more than anything, motivated to succeed. Mark was even nice enough to send me a text thanking me for being there to support him and the team.

I got to see him play a few more times the next year (a devastating loss at Oregon State and a blowout win at WSU), but by that time he was a starter and media darling, and there was always such a crowd around him that we rarely got to spend more than few minutes together. Still, he always took time to say hi and thank us for making the trip to the game.

We were a bit crushed when the Seahawks passed on Mark in the draft, but it was great to see him enjoy success his rookie season with the New York Jets. He might be one of the biggest stars in football now, but I'll always remember him as the back-up QB who was willing to hang out with a couple of admiring fans. 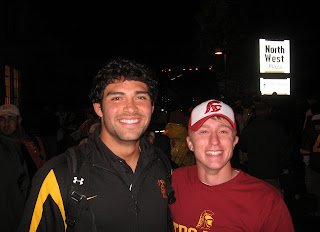 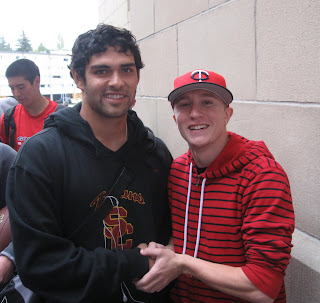