A Great First Trade With Thoughts and Sox

I was lucky enough to pull an Adrian Beltre SP Black Border mini (1:130 packs) from my box of Allen and Ginter, which opened up a whole new can of worms when I finally found someone to send all my Red Sox to (and there's a lot of 'em_. Adam from Thoughts and Sox got ahold of me and we worked out a Sox for M's trade. Here they be: 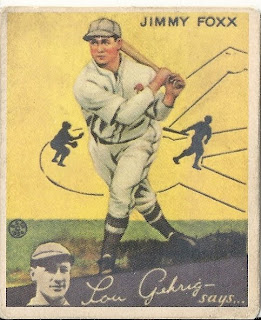 1934 Goudey Jimmy Foxx Reprint: Though this card looks legit (in what would have been the most lopsided trade since the Indians sent Bartolo Colon to the Expos for Cliff Lee, Brandon Phillips and Grady Sizemore) it turns out Adam isn't actually a billionare, and it's just a really good looking reprint. Still, it's a cool card and it fills a page in my player collection binder which is always a good thing. 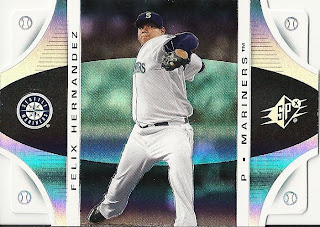 2007 SPX Felix Hernandez: Though this is a just a base card, it looks like a case hit with the die-cut borders and world class shine. I miss Upper Deck and so can you. 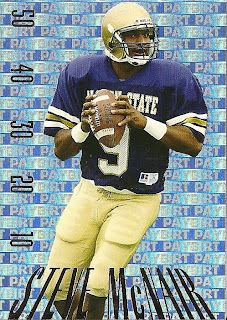 1995 Skybox Premium Steve McNair Pay Dirt: Growing up Steve McNair was my favorite player and the Houston Oilers/Tennessee Titans were my favorite team. Don't ask me why, I've never been to Tennessee and have no personal connection to the state. Adam was kind enough to send along about 30-35 nice McNairs which basically quadrupled my collection. 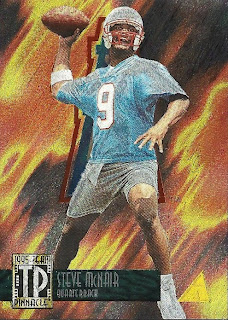 1995 Pinnacle Team Pinnacle Steve McNair/Kerry Collins: Maybe it was McNair's toughness that drew me to follow his career--dude played football with a broken sternum. This card is a bit ironic because both quarterbacks on this card would eventually play for the Titans, even though neither did at the time this card was made (yes I know the Oilers became the Titans, but still). Classics 90's, this card has dufex on one side and shine on the other. Boss.

Thanks for the great cards Adam!
Posted by The Notorious B.U.D. at 9:59 AM