I bought this box about a month ago off eBay for a decent price hoping to pull an Austin Jackson, Brennan Boesch or Mat Latos rookie auto. The box took about three weeks to show up, and of course, was full of crap. Here's what I pulled: 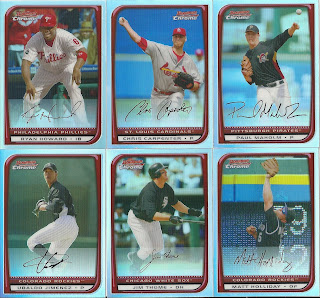 Howard/Carpenter/Maholm/Jimenez/Thome/Holliday Refractors: While these are good looking cards of decent to great players, I was disappointed to not pull a single x-fractor or colored refractor in the box. Sometimes the baseball card gods just aren't on your side. 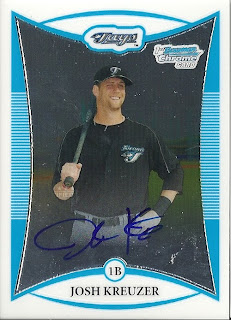 Josh Kreuzer Rookie Auto: Before I bought this box I hoped aloud that I didn't pull an auto of the murderer (Angel Villalona) or the guy who wasn't in baseball anymore (Josh Kreuzer). So what did I do? Pull a Kreuzer auto of course. He was 26-years-old when this card was released and never progressed past Double-A. Thanks Bowman...thanks a lot. 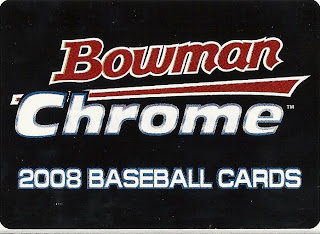 2008 Bowman Chrome Sticker: This hit really saved my break, as I can use it on the end of a box to help me organize my collection. I haven't seen any on eBay yet, but I'm conservatively guessing it's worth around $800.

Overall Thoughts: There aren't that many great names in the autograph checklist and colored refractors are few and far between. After a couple of great boxes of Bowman in the past few months, my luck finally ran out and I hit the wall in a bad way. I don't think I would open another box of this, even if I could get it for around $40 again. My advice? Stay away!
Posted by The Notorious B.U.D. at 3:29 PM