Movin' and a Shakin': Trades with Tribe Dad and Greg from Night Owl Cards

Well, it's been a while since I updated my trades, (although in my defense, I don't think I am the only one in the blogging community with this problem) and Night Owl and Tribe Dad have been waiting so patiently, so without further ado here are the latest spoils from my trades with those two hooligans.

First up, the cards from Tribe Dad over at All Tribe Baseball: 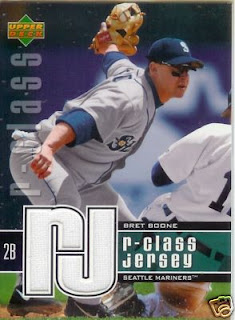 2004 Upper Deck R-Class Bret Boone Jersey: Despite the overwhelming evidence that he used steroids, I always enjoyed what Bret Boone brought to the Mariners. The feisty infielder had one of the best offensive seasons of any 2B in history in 2001 (.337-37 HR-141 RBI). My only qualm with this card is that the jersey swatch is partially obscured by the RJ logo; I want full unadulerated access to the game-used memoribilia on a card, no excuses! 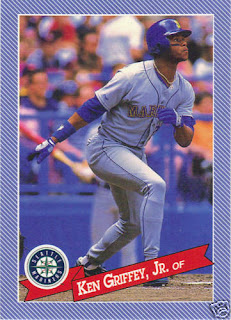 1993 Hostess Ken Griffey Jr: The only thing I love more than a tasty Hostess treat (I am partial to their fruit pies) is a Hostess baseball card of the great Ken Griffey Jr. I really like the look of this card, the border sets of the Mariners' uniform nicely.

Next, the cards from Greg over at Night Owl Cards (who is likely still smarting from the Dodgers early playoff exit, my condolences good sir, there's always next year):

2009 UD Goodwin Champions Ichiro: A great looking card, and the only one left from the set besides Felix Hernandez that I still needed. Probably the coolest card in Goodwin. 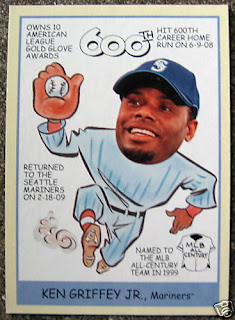 2009 UD Goudey Ken Griffey Jr. Heads-Up SP: Another Griffey to add to the collection, the Heads-Up insert set is about the only redeeming thing about this year's Goudey set.Thanks to both Tribe Dad and Greg for the great cards.

This community of collectors make the hobby much more enjoyable than it would ever be alone. Can't wait for more trades soon!