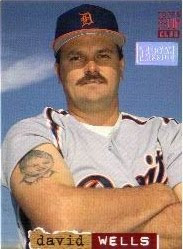 With the Tigers on the verge of one of the epic collapses of the last decade (I'm talking New York Mets awful), I thought I should give their fanbase something to be excited about by showcasing this beauty: a 1994 Stadium Club David Wells First Day Issue Parallel with a stated print run of only 2,000 copies. My brother pulled this card from a pack of Stadium Club that he won in a game of bingo 15 years ago, and since he doesn't collect anymore, was kind enough to let me have it. Stadium Club has long been renowed for it's fantastic photography, and I love this potrait of baseball's original hefty lefty (a title since passed to C.C. Sabathia). Wells has rolled up the sleeve of his right arm to showcase a tattoo of, well I hope his kid, but since this pitcher once claimed to throw a perfect game with a hangover it could be anyone's child (or perhaps a portrait of him as a young boy). I never remembered Wells as a Tiger and it's easy to see why, his two seasons there were pretty forgettable (11-9 in '93, 5-7 in '94). Since theme collecting is all the rage in the blogosphere right now, I suppose this will be the first card in my "First Day Issue" binder. Here's hoping this card helps ease the pain felt by Tigers' fans after the Twins take care of business tonight (4-2). Thanks for the memories David Wells, you sure made baseball more entertaining.
Posted by The Notorious B.U.D. at 9:34 AM