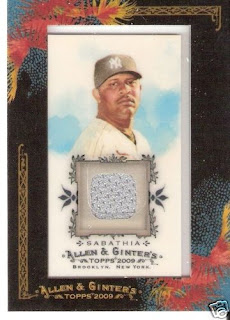 If you've read my blog at all, you know that I bought an unreal amount of Allen & Ginter this year. I'm talking mountains of A & G as big as David Eckstein. When opening that much of a single product it's not unusual to get doubles or triples of base cards and some inserts. What's less expected is getting multiple relic cards of a single player, but that's exactly what happened to me.

I pulled not one, not two, but three C.C. Sabathia jersey cards from packs of Allen & Ginter in the past three months. Now I don't hate Sabathia, in fact I quite enjoyed his historic run with Milwaukee last year, but now that he's a Yankee it's a little more difficult to root for him, and I certainly don't need three of the same card of him.
So I am giving my loyal reader(s) a chance to win a '09 Allen & Ginter C.C. Sabathia jersey. But that's not all, the winner will also recieve any missing base cards from their set that I can provide. All you have to do to win is post a comment and I will draw a winner at random over the next few days. The winner will be notified by email and can then send me their A & G want list.
UPDATE: And the winner is....Brian from Play at the Plate! He was chosen randomly (I would assume) by random.org. Thanks to everyone who entered, there will be more contests to come soon. Congrats again to Brian for winning the Sabathia jersey, A & G cards, plus another card to be named later!
Posted by The Notorious B.U.D. at 1:38 PM