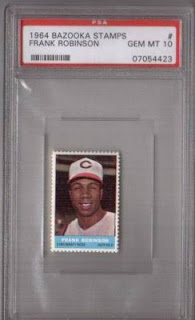 I'll be the first to admit that I don't know a whole lot about this card, other than the fact that it is actually a stamp and not a card at all. I received this as a Christmas present 5-6 years ago from my dad and was excited to add it to my collection because I didn't (and still don't) own many vintage items, not to mention that Frank Robinson is one of the game's greatest, if overlooked, players. Robinson had a historic career that included winning MVP awards in both leagues, a Triple Crown, 586 career HR's, two World Series titles and the distinction of becoming the first African-American manager in Major League Baseball. Quite simply, Robinson was a bad mother...shut your mouth.

I have tried to research this card in vain and was wondering if anyone who reads this blog knows any more about 1964 Bazooka Stamps. I am assuming that it is somewhat rare, because I have never seen another '64 Bazooka Stamp graded PSA 10, and certainly not one of a player in the same echelon as Robinson. Any ideas about the value/scarcity of this card?
Posted by The Notorious B.U.D. at 11:48 AM