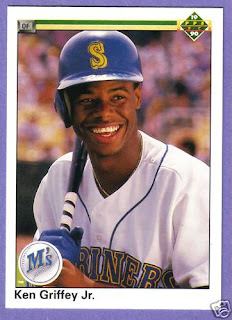 Easily one of my favorite early issues of Ken Griffey Jr (yes, even more than his 1989 Upper Deck rookie card) 1990 UD features a young Junior flashing his megawatt smile that would capture the hearts of fans in Seattle and across the rest of the nation. Fresh of a rookie season that saw the Kid hit .264 with 16 HRs, 61 RBIs and 16 SBs, M's fans had plenty of incentive to scoop up this card after his 3rd place finish in the ROY voting (finishing behind such well known players as Gregg Olson and Tom "Flash" Gordon)...and he was just scratching the surface of his unbelievable talent.

The back of the card reads: "Considered best rookie everyday player in AL in 1989 as he made impressive jump from Double-A in only 3rd pro season. Ken and his father are baseball's first father/son combination to play simultaniously." Apparently they spelled simulataneously different back in 1990, but I still love the candid shot of Griffey which shows why he has been adored by fans for so long: his love for the game and omnipresent smile made it impossible not to like the Kid. His joy for the game was contagious and he brought hope for the future to an otherwise dismal baseball team. There will never be another player like Ken Griffey Jr and I hope everyone who follows baseball got a chance to see him play...he truly was one of a kind.
Posted by The Notorious B.U.D. at 9:37 AM