After getting skunked on a couple of boxes of Draft about a month ago I decided I was better off spending my money on singles from the set. I got the following cards for the less than the price of a box, so I'd call this break a success: 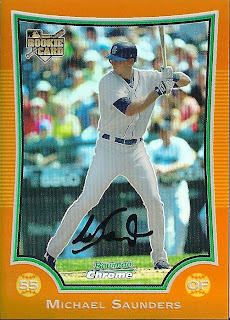 Michael Saunders Orange Refractor #21/25: I'm getting close to my first rainbow (red refractor incoming) with this card, and will show it off in it's entirety once it's completed. Now I just have to hope Saunders turns into a passable big leaguer. 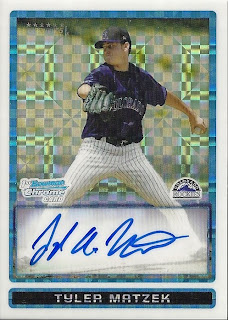 Tyler Matzek X-Fractor Auto #/225: Tyler Matzek is a hard-throwing lefty in the Rockies' system who posted a 4-1 record with a 2.92 ERA and 88 K's in 89 innings. The stigma around Colorado pitching prospects has disappeared with the emergence of Ubaldo Jimenez and Jhoulys Chacin, and hopefully Matzek will be adding to that mix in a few years (he's only 19). 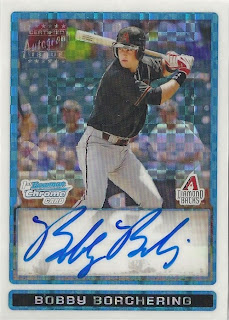 Bobby Borchering X-Fractor Auto #/225: Bobby Borchering was one of a multitude of Diamondbacks first round picks last year, and looked every bit the part in 2009, hitting .270 with 15 HR's and 74 RBI's at age 19. This is one of the best designed Bowman autograph sets ever, with the white box providing a nice background for signatures. 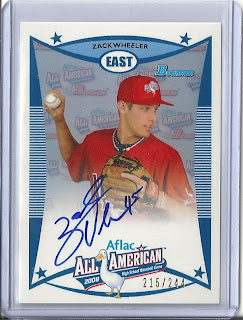 Zach Wheeler Aflac Auto #215/244: Zach Wheeler joined a talented group of Giants' pitching prospects after being drafted 6th overall in 2009. He struggled with consistency during his first year in the minors, but still posted a 3.99 ERA and 70 K's in 58 innings. The Aflac autos were inserted one per case and feature signatures from the country's top highschool prospects--and their on-card, as all autographs should be.

Thanks for looking!
Posted by The Notorious B.U.D. at 2:28 PM