After Rick Ankiel's mammoth longball into McCovey Cove carried the Atlanta Braves over the San Francisco Giants last night, I figured it was a good time to dig out my favorite cards of this pitcher turned hitter and show them off to the blog world. Here they be: 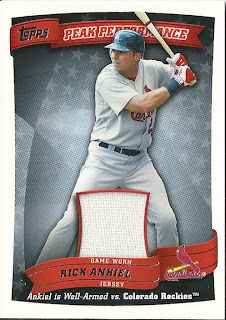 2010 Topps Peak Performers Jersey: I pulled this card from a pack myself which gives it a special place in my collection which is good because it's a very regular looking card. 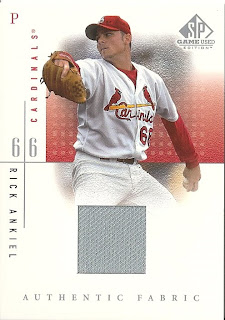 2001 SP Game-Used Edition Jersey: I got this beauty from the ever generous Kerry at Cards on Cards. Despite the fact that this set forever watered down game-used cards, I like it's straightforward, clean design. 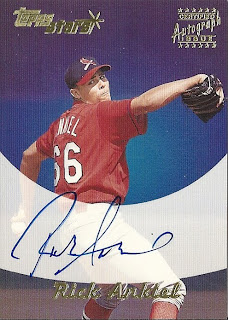 2000 Topps Stars Autograph: A nice on-card autograph from Brian at Play on the Plate, this was an awfully hot card when it was released about 10 years ago. Has it really been that long sicne Ankiel was airballing pitches off the backstop? 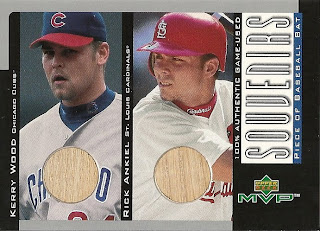 2001 UD MVP Kerry Wood/Rick Ankiel Game-Used Bats: This game-used card is rather prophetic, as you don't often see game-used bat cards of pitchers. While Kerry Wood still doesn't know how to use one, Ankiel certainly does. Both of these players are in the playoffs this year too, although with different teams than on the card. 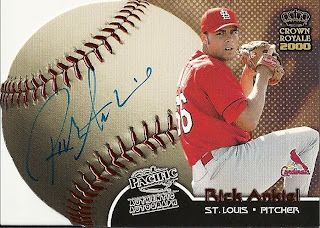 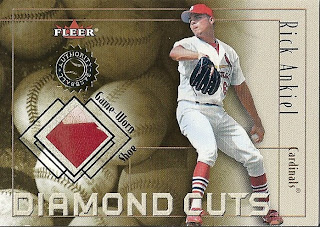 Thanks for looking! Keep up the good work Rick!
Posted by The Notorious B.U.D. at 11:52 PM