I was out of town for work the other day and happened to find a small card shop in a strip mall. There wasn't a great selection of next wax (not a single baseball product I liked) but I couldn't resist a rare chance to open some hobby packs. After some deliberation, I settled on half a box of 2010 Donruss Classics Football. Here's what I pulled: 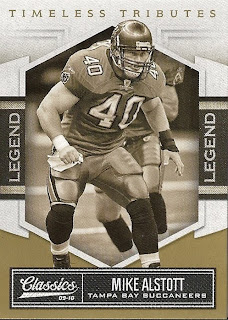 Mike Alstott Legends Timeless Tribute Gold #6/50: Alstott was one of my favorite players growing up; his combination of power and speed made him one of the few fullbacks in football who got more than a few carries a game. I always made sure to trade for him in franchise mode on Madden. Donruss/Panini has ruined the serial number, but that doesn't mean I don't enjoy pulling something "limited" to less than 100. 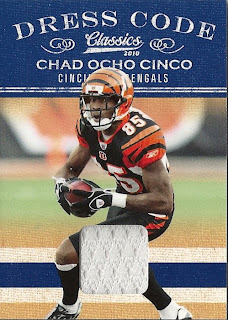 Chad Ocho Cinco Dress Code Jersey #223/299: I still laugh every time I see the name Ocho Cinco on a football card, so I was delighted to pull a jersey card of ole number 85, even if Panini has no idea how to design a jersey card. 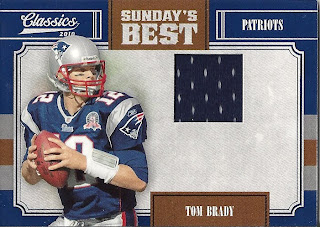 Tom Brady Sunday's Best Jersey #90/150: I know I'm supposed to hate Tom Brady because he's basically the Derek Jeter of football, but I just can't bring myself to do it. Hopefully I can trade this for a nice Mark Sanchez jersey card.

Overall Thoughts: I didn't do awful for 9 packs (I also pulled an Anthony McCoy RC #/999, and Eddie George Legend #/999 and a Antonio Gates Dress Code #/100) but I don't think I would consider buying classics again anytime soon. Panini has started to improve as a card manufacturer, but not to the level where I would invest in a whole box. Let me know if you are interested in any of the cards. Thanks for looking!
Posted by The Notorious B.U.D. at 10:23 PM