I've been burned out on baseball lately (blame the Mariners for that) so I've turned by card buying focus to football cards. Topps Chrome is always one of my favorite sets and has great value at the retail level (with an insert or refractor in every pack). Here are some of my top pulls (in addition to countless rookies and refractors) so far: 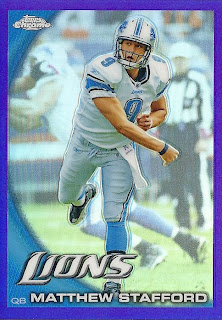 Matthew Stafford Purple Refractor #/555: Since I'm a Mariners fan, I've developed quite a heart for losing teams, and no team knows how to lose better than the Detroit Lions. They've looked a lot better so far in 2010, and with Stafford at the helm things seem to be moving in the right direction. As for my Mariners... 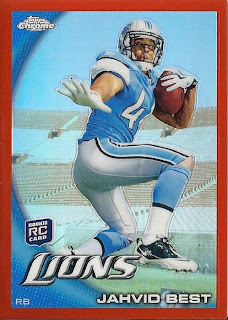 Jahvid Best Orange Refractor RC: The orange refractors were inserted three per valu-pak and add a great punch to retail. I'd love to pull a Tebow orange refractor as the borders would really bring out his Broncos' jersey. Best has been explosive at times but slowed down by turf toe--once he's healthy he should put up some big numbers. 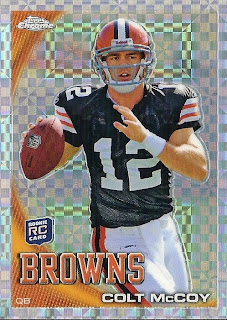 Colt McCoy X-Fractor RC: The x-fractors from this set look phenomenal and I was thrilled to pull one of a rising star in Colt McCoy. Although undersized, McCoy looked great in his first start against the unforgiving Steelers defense, and I think he has a very bright future. I'm keeping it for now, but Play at the Plate has first dibs if I decide to move it. 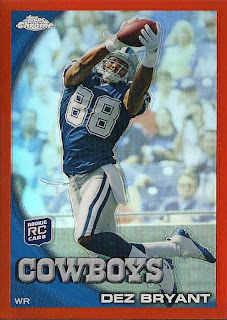 Dez Bryant Orange Refractor RC: Though he hasn't produced so far Dez Bryant has all the tools to be a top tier wide receiver--as long as he keeps a level head. He's shown flashes of brilliance but has been lost for the most part in a terrible season for the Cowboys. 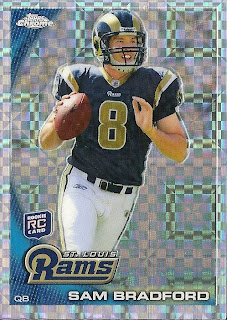 Sam Bradford X-Fractor RC: This was a great pull, but alas, it fell victim to Topps' legendary chrome printing issues. In this instance, it was terrible centering and a small dimple above Bradford's helmet. It will still sell, but not for as much as it should have. Bradford has been amazing thus far in 2010, leading the woeful Rams to a .500 record despite a lackluster supporting cast. He's good. 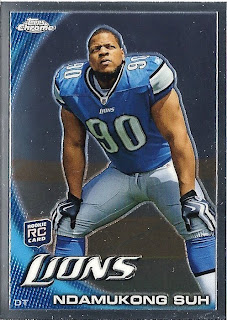 Ndamukong Suh RC Variation SP: No, I wasn't quite as lucky as the Mojo Hand who pulled two autographs from blasters, but these rookie variations are case hits and this card actually sells for more than Suh's autograph card from the set (it doesn't make sense, but I don't mind). The variation came in a pack with 5 cards (instead of the regular four) which also had the McCoy x-fractor in it. A super hit for retail.