A Playoff Swap with the Pride of Texas (PATP)

Since joining the blogosphere I've completed more trades with Brian from Play at the Plate than anyone else. We cheer for division rivals (Seattle and Texas) so swapping cards is cinch. Here's the lastest batch he sent my way: 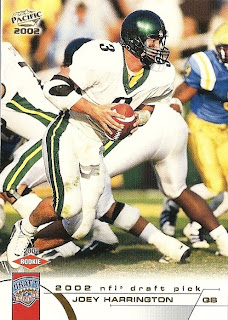 2002 Pacific Joey Harrington RC: I'm not sure whether Brian sent this as a joke or not but I was always a fan of Joey Harrington during his college days at Oregon. Harrington was considered a bust by most, but given his surroundings (the Detroit Lions) he performed admirably. According to Wikipedia is a now a commentator for Oregon Ducks football games but is open to a return to the NFL. I'm not holding my breath. 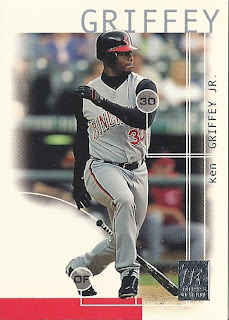 2002 Topps Reserve Ken Griffey Jr: I never bought more than a few packs of Topps Reserve so I still needed this card to add to the Griffey collection. I'm not sure of the exact number of cards but I think it's nearing 600. Thousand. 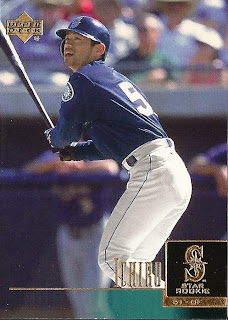 2001 Upper Deck Ichiro RC: I don't know if Brian intended to send me an Ichiro rookie because it was in the middle of a bunch of other 2001 UD Mariners, but I certainly won't complain. I admire Ichiro more every season--a beautiful flower in a crappy pot. 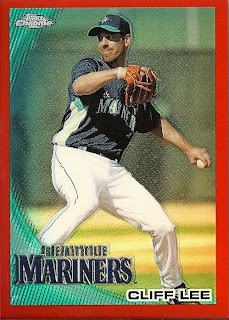 2010 Topps Cliff Lee Orange Refractor: Brian was kind enough to throw in a card of the player who might help his team win the World Series. Cliff Lee is so, he doesn't even seem real. The orange refractors look great and were a nice addition to retail.

Thanks Brian! Go Rangers!
Posted by The Notorious B.U.D. at 1:10 PM