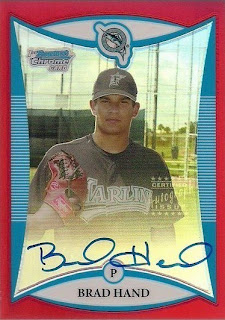 Well, it looks like my O.C.D. finally got the best of me, and in one fell swoop I took this whole prospecting craze to the next level.

I took the plunge on this card last week while browsing eBay on a slow afternoon at work (always a bad idea). I've been hunting for an under the radar prospect to collect, and for no real reason, was drawn to Florida Marlins' farmhand Brad Hand (too many hands in one sentence). I put in an offer on the card that I didn't think the buyer would take, but lo and behold he did, and I found myself in possession of my lowest numbered card ever (#1/5).

Since that time, I've found myself closely following Hand's starts for the Jupiter Hammerheads (High Class A), despite the fact that he's still years away from the majors (still just 20-years-old). On the season, the young left-hander is 5-4 with a 3.10 ERA and 88 strikeouts in 87 innings. He's cut down on his walks and increased his strikeouts since last season and looks like a viable big league starter (and maybe an ace) down the line.

Will I be patient enough to hold onto the card until then? Only time will tell, but in the meanwhile, it's a great looking card and a fun way to spice up the collection.

Anyone else have an under the radar prospect they collect?
Posted by The Notorious B.U.D. at 9:02 PM