I hadn't planned on buying an entire retail box of 2010 Bowman, but when after two blasters and half a box of cards yielded nary a single Strasburg, I let my stubborness get the best of me and took the plunge for the rest of the box. I just wanted to pull one Strasburg (I would have settled for a Bryce Harper) before calling it quits, and my Captain Ahab-esque obsession wouldn't let me leave empty headed. Here's what the box yielded: 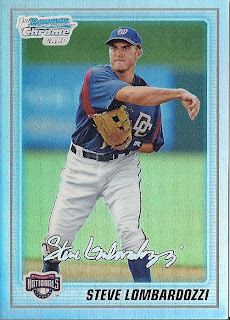 Steve Lombardozzi Refractor #/777: Well, he plays for the Nationals and his name is Steve, but it's not quite the Steve we were looking for. Regular refractors are a tough pull in retail at 1:32 packs and, as always, are solid looking cards. 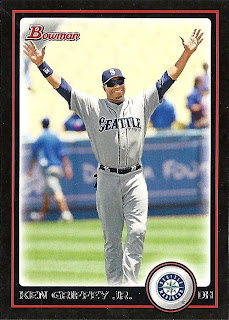 Ken Griffey Jr. Base Card: Probably the only non-rookie card I wanted from the set. I still don't believe that he's retired. 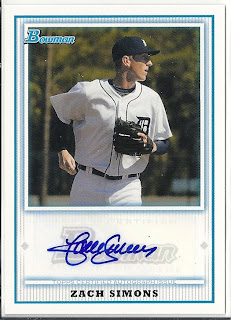 Zach Simons Retail-Only Autograph: Though the autograph is a beauty, there's not too much else to get excited about with this card. Simons is a 25-year-old pitcher in Double-A--Strasburg will be in the Hall of Fame by the time he is 25.

Alexis Oliveras/J.R. Murphy/Caleb Brewer Purple Refractors #/999: The purple refractors are a retail-only insert that are inserted 1:8 packs. While I didn't pull any big names, they're great looking cards and the addition of the serial number is a nice bonus. Hopefully, one of these youngsters turns into a solid major league player. 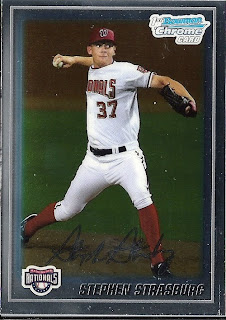 Stephen Strasburg Chrome Rookie: Alright! I breathed a sigh of relief when I finally pulled this card, knowing that my quest had finally come to an end. It's not perfectly centered, but it's certainly better than some of the other Strasburgs I've seen out of retail. Of course, after all this work I'm just going to put the card on eBay to make back some of my money, but at least I won't have to buy any more Bowman. Stubbornness is not cheap.
Posted by The Notorious B.U.D. at 11:29 PM