Topps Series II retail finally showed up in the Northwest--a nice reprieve from the Bowman binge I've been on recently. I grabbed three packs from Walmart and was lucky enough to pull two Million Card Giveaway Redemptions (in one pack strangely enough) and another card that I'll show later. I'm not patient enough for a run of old cards to show up so I redeemed them right away. Here's what I got: 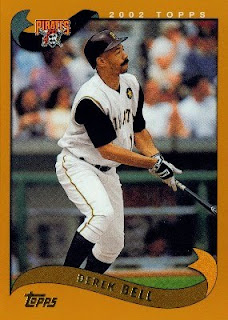 2002 Topps Derek Bell: The one thing I remember about Derek Bell is that he was one funny looking dude. He did hit 134 career home runs, but that doesn't do much to distract from Bell's prize winning mustache or that honey dijon border. It's certainly up for trade--please take it. 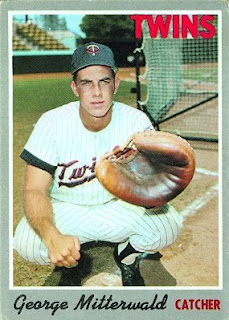 1970 Topps George Mitterwald: That's more like it! Minnesota's original Joe Mauer is featured on a 1970 Topps card, my first from the iconic (?) set. Mitterwald was a defensive specialist who led the National League in caught stealing percentage at 50% in 1975. This card is probably headed over to Play at the Plate when I finally send away for it (some time I promise).

Thoughts: I can't complain about receiving two redemption cards in one pack, especially when one leads to a vintage card. I'm sure these won't be the last cards I redeem, especially with the chance at a Strasburg short print rookie. Stay tuned for more!
Posted by The Notorious B.U.D. at 9:39 PM