Yes Margaret, I am a Duke Blue Devils' Fan. 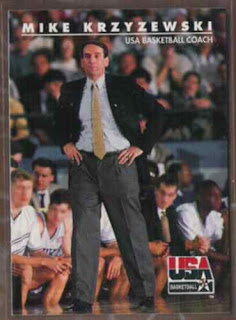 I'm sure that admitting I am a fan of one of college basketball's most hated programs likely won't gain me any fans in the blogosphere, and that's okay. After all, it could be worse. I could be a Yankees' fan.

Now you may be asking yourself "how does someone in the middle of Washington become a fan of a small, private college in North Carolina?" Well, it's not because I attended school there (you've seen my writing and we all know it's not exactly "Duke" material---heck, I don't even know when to use commas properly) and I don't personally know anyone that graduated from Duke (although I was friends with Sheldon Williams on Facebook for what it's worth). No, it was a chance encounter with carbonated beverages that led me to become a devout follower of Coach K and the Dukies.

You see, in the last year that Duke won a National Title, Pepsi -Cola had a promotion wherein they randomly placed the names of every team in the NCAA tournament on a lid of their delicious soda pops. Most of them were schools like Slippery Rock St. or Holy Cross but a few lids yielded teams like Michigan St., Cincinnati and other legitimate contenders. If the team on the lid won the tournament, you could send it in for a jersey of that team--not a bad prize from a 99 cent bottle of pop.

At the time of this promotion I was 14-years-old and didn't have a team that I followed closely. I lived about equidistant from Washington State and the University of Washington, but neither one of them were particularly good teams. Gonzaga had just begun their ascent from mid-major afterthought to giant-killer, and I rooted for them, but had no personal connection to the school. I was a young man looking for his team, and as fate would have it, the Blue Devils would become that squad my heart so desired.

I worked part-time at the grocery store in town and would get one free pop for every shift I worked there. With the chance at a free jersey I always grabbed a Mountain Dew or Pepsi for the chance at a good team like Duke, but ended up with Mississippi Valley St. or Bowling Green instead. It appeared I was out of luck until one of my co-workers cracked open a Pepsi, drank it, and subsequently threw it away. Being the opportunistic lad I was I grabbed the bottle out of the trash (it's before recycling was invented) and yelped with delight as I unscrewed the lid to reveal one very exciting word: "Duke".

I clutched that lid tight and didn't let it out of my sight the entire tournament. The Blue Devils, led by Shane Battier and Jason Williams, went on to win the NCAA Title 82-72 and my fandom was sealed as soon as I received by brilliant blue Duke jersey in the mail. How could I not be a fan of the school that was generous enough to provide me with a free jersey?

Since that time I've continued to follow the Blue Devils closely, although it has provided nothing but heartache and disappointment until this latest March Madness run. Duke has been called a pretender all season, yet here they are in the final game of year, looking unstoppable after their drubbing of West Virginia. Tonight they face Butler in a classic David vs. Goliath match and for the first in quite a while I find myself rooting for Goliath, wearing that same jersey that led me to the Blue Devils' bandwagon so many years ago.