I know, I know. A football box break on a baseball card blog--this is not what we're paying you for Bud. Of course, I'm not actually being paid by anyone, so I will continue on with little no regard for the wants and needs of my readers. I guess I'm just callous like that.

Besides, what were my other options? 2010 Topps or Topps Heritage? Sorry, if I wanted bland I would eat Wheaties for breakfast--I'm a Crunch Berries kind-a-guy. 2008 Upper Deck X at 50% off? Maybe if it were 100% off. Press Pass? Not in this lifetime.

So I did the only logical thing, going back to the well that had produced some beautiful autographed patch cards of NFL stars past and present. Was I greedy hoping for more? Probably, but dammit, I was too proud not to try one more time. Had the water finally run dry? Read on and find out brave blog followers, read on and find out... 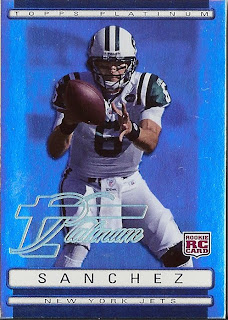 Mark Sanchez Rookie Variation #590/1459: After the first two packs of this blaster I was left staring at a Jason Smith Rookie Variation (we all know the resale value of offensive tackles) and a Jarrett Dillard (who?) refractor numbered to 999. Clearly, I made a mistake, and the card gods were punishing me for it. But in the third pack, a glimpse of hope emerged, shining bright in a sea of platinum. A numbered card of one of football's hottest rookies and a pro player I know personally (more on that in a Brush with Greatness type post); maybe all was not lost after all. 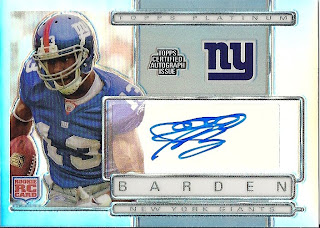 Ramses Barden Rookie Autograph #190/850: Well, Ramses Barden won't win any awards for penmanship (I bet Sign Here and Here would have a field day with this one), but an autograph from a blaster is nothing to scoff at, even if "the Pharaoh" only caught one pass all season. Barden was a third round pick, so there's still hope he turns out. After this card I figured the blaster was spent, but it still had one more treasure for me to unearth. Behold! 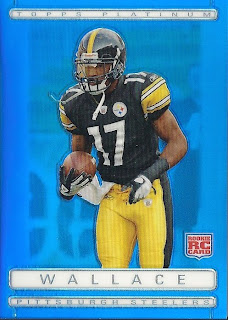 Mike Wallace RC Blue Refractor #50/99: Though the card may be blue I certainly wasn't after pulling a low-numbered refractor of one of football's most underrated rookies. Come football season this card alone would likely pay for the entire blaster but it's so pretty I might have a tough time parting with it. Mike looks great in blue.

Closing Thoughts: Just like Arnold in Conan the Barbarian I turned to the card gods, bought this blaster, and screamed "if you won't help me now...then the hell with you". Good luck or fate had nothing to do with it; I willed this box to be a winner and against overwhelming odds it was.

Will I punished for my insurrection with a 2010 Allen and Ginter hobby box full of Fred Lewis relics? Without a doubt. But until then I'll bask in the calming blue glow of Mike Wallace and the knowledge that my twenty dollars was well spent.