My First Check Out My Cards Purchase

Alright, judging by the response to my last post nobody here cares about football cards, so I'll go back to something that everyone loves: purchases from Check out My Cards! I was really impressed with the selection of the site as well as the prices, and was happy to nab some Griffeys, Felixs and other Mariners for a song. The shipping charges seem to be a little high, but in most cases it is still a better deal than buying this cards separately on eBay. Here's the goods: 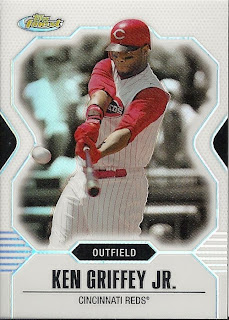 2007 Finest Ken Griffey Jr. Refractor: I think I've run out of adjectives to describe how much I love refractors, especially of Junior, so I'll let you insert your own for this beauty. 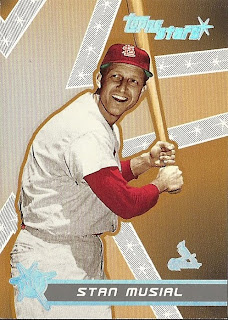 2001 Topps Stars Stan Musial: Stan the Man is one of my favorite "old-time" players and 2001 Topps Stars is a guilty pleasure set of mine so this card was a match made in heaven. Not surprisingly, the back of the card gave Musial five stars for hitting ability. 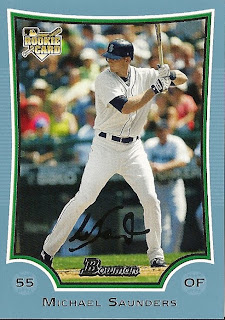 2009 Bowman Draft Picks Michael Saunders Blue #/399: Although "the Condor" is currently toiling away in Triple-A I think he is still a big part of the Mariners future, and will probably get a call-up sooner rather than later with the way the M's offense is performing. The Bowman blue parallels look nice when paired with the Seattle unis. 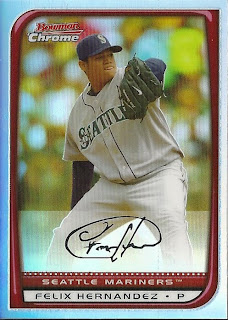 2008 Bowman Chrome Felix Hernandez Refractor: A refractor for 50 cents? Only a crazy person could say no, and I am no crazy person (debateable). I couldn't be more excited to have this guy around for five more years. 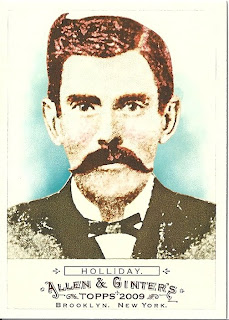 2009 Topps Allen & Ginter Doc Holliday SP: This might be the most plain but important card from the whole purchase. With this Doc Holliday short print I have finally completed the 2009 Allen & Ginter set that I started so long ago. It's a good feeling.
Posted by The Notorious B.U.D. at 2:59 PM