Pack Attack: The Strangest Pack I Ever Opened

As I alluded to in my last post I used to spend the majority of my earnings as a teenager on 12 pack/$9.99 re-pack boxes from Target, Shopko or K-Mart. It's not much of a stretch to say that the cards from these boxes compose around 20-25% of my total collection--an amazing number when you consider that I haven't bought one in years (the quality has really gone downhill). I pulled quite a few hits from these boxes, including the Randy Johnson previously showcased, but I'm not quite sure what to call the strange card I pulled from one very unusual pack of 2003 Bowman Heritage.

It's not the first time I ever pulled an extra card in a pack, but it certainly was the first time I pulled an Upper Deck card from a Topps product. I've actually still got the cards in the original wrapped in a drawer, and although there is no way to prove this actually happened, it did make me a little wary about purchasing repackaged products.

Any else ever run into a situation like this? 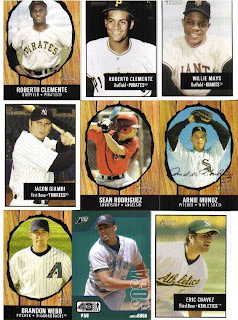