Overdue Trades From Around the Blogosphere

Here's a bunch of cards in a row!

This first card is not actually from a trade, but rather a group break sponsored by Thorzul. I picked up the Reds and Dodgers and was happy to walk away with this gem: 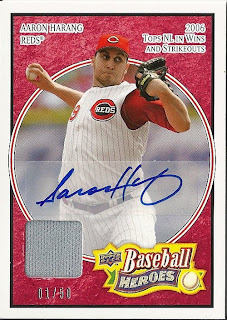 2008 UD Heroes Aaron Harang Auto Jersey #1/50: I've always appreciated the Harangatang toiling away in obscurity for the Reds, and he has been an important part of a couple of fantasy teams. A very nice card and a true eBay one-of-one!

The next card comes from Ed at Roll out the Barrel. It was my first trade with him, but certainly not the last: 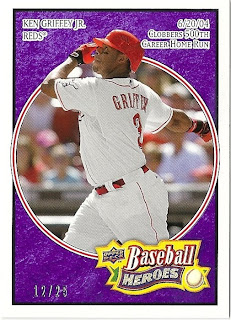 2008 UD Heroes Ken Griffey Jr. Purple Parallel #12/25: Ooooooh pretty. I love all the different parallels in UD Heroes and I am setting out to complete a Griffey rainbow. This was one of the hardest cards to get from the set with only 25 copies, so I really appreciate that Ed was willing to part with this gorgeous Griffeey.
Next, we have some cards from Mr. Scott. We worked out a trade a while back and the cards he originally had planned to send me got lost in the mail. Being the generous fellow he is, Mr. Scott found some new (and improved!) cards as part of our swap: 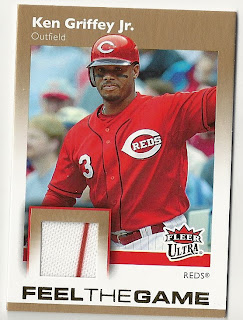 2007 Fleer Ultra Ken Griffey Jr. Jersey: I'm always happy to add a Junior relic to my collection, no matter whether it's with the Mariners or Reds. It's a simple card, but nice, and the pinstripe always adds a little something extra. 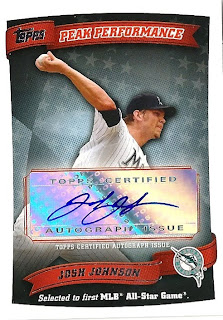 2010 Topps Peak Performers Josh Johnson Auto: Believe it or not, I own more autographs now of Josh Johnson than any other player. That's fine though, as I am high on the Marlins young ace even after his slow start to the 2010 season.

And last but not least are some cards from one of the baseball blogosphere's elder statesmen and wordsmith extraordinaire, Night Owl. We've worked out quite a few trades and he always send some great cards my way. Here's the latest batch: 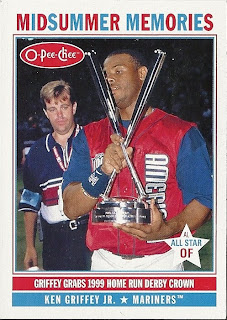 2009 O-Pee-Chee Midsummer Memories Ken Griffey Jr: This card probably takes the cake for worst photograph of Junior ever. Not only is he partially obscured by the HR Derby Trophy (yeah, he's the man) but there's also that guy dressed like a late-90's square creeping in the background. This one probably won't back the front page of my Griffey binder, but still a new addition and a welcome one at that. 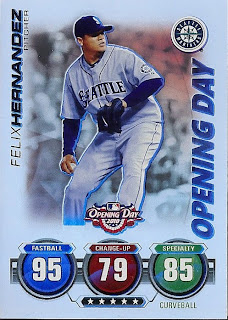 2010 Topps Opening Day Attax Felix Hernandez: These cards aren't half bad looking as the foil reflects quite nicely in person. That being said, I have little desire to ever buy a pack of Topps Attax. 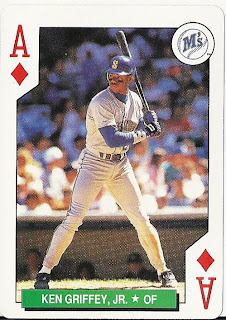 1991 Ken Griffey Jr. Playing Card: I believe it was GSNHOF that sent me a Griffey playing card that featured the Kid as a "4". I was outraged that Junior was assigned a number that was clearly not indicative of his talent level. I can sleep easier now that Griffey has regained his rightful place as an "ace" of the ballpark.
Thanks to everyone who sent me cards! I hope it will never take so long to post them again. Have a great week and I'll smell ya later.
Posted by The Notorious B.U.D. at 10:38 PM