Two thousand and ten was a banner year for me in terms of card collecting with a bevy of big money hits and rare pulls. Of course I also spent a boatload of money, but in the end, I'd say I did pretty well. Judge for yourself: 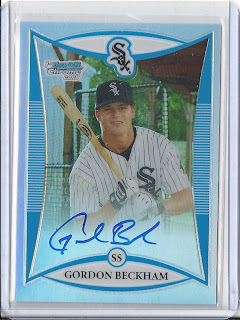 #5) 2008 Bowman Draft Gordon Beckham RC Auto Refractor #/500: This might not be the biggest pull in terms of monetary value after Beckham's stinker of a season, but considering I pulled it from two packs at a gas station, I feel it deserves to make the list. The card is in great condition and I might send it in to BGS or PSA if I ever work up the energy. It'll be tough to pull a better card from a gas station, but I'll never rule it out... 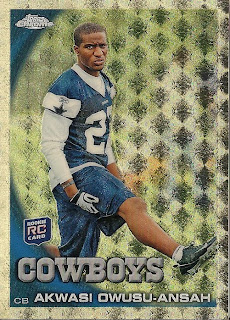 #4) 2010 Topps Chrome Awkwasi Owusu-Ansah Superfractor RC #1/1: I thought I might go my whole collecting career without pulling a superfractor but in my second ever hobby box of football cards I pulled this beauty. Now, Akwasi Owusa-Ansah (henceforth referred to as AOA) isn't exactly a household name, but anybody in a Cowboys uniform is a potential hobby star and I can't complain about an amazing looking card that was 1:2,500+ packs. 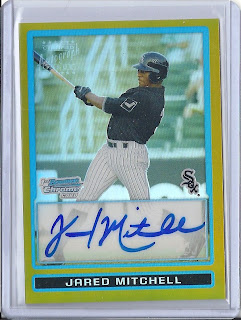 #3) 2009 Bowman Draft Jared Mitchell Gold Refractor #37/50: With some of the proceeds of the sale from card number one on this list (you won't want to miss that) I purchased a box of 2009 Bowman Draft from Atlanta Sports Cards and pulled a Mike Minor RC Auto and this Jared Mitchell Gold Refractor RC Auto which sold for $150. It was tough to part with because I love the design of 2009 Bowman, but I don't have the courage for high stakes prospecting, so I dropped it like it was hot. 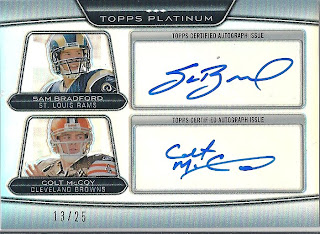 #2) 2010 Topps Platinum Sam Bradford/Colt McCoy Dual Auto #13/25: This card came from my very first hobby box of football cards after the frustration of not pulling a patch/auto out of countless retail blasters reached it's boiling point. I ordered this box from Blowout Cards and although it didn't contain a patch auto (Topps rectified the situation later) I was awfully happy to pull a dual auto of the top rookie quarterbacks. With Bradford's strong season and McCoy's late season emergence, I was able to sell this on eBay for a cool $150. If only every box was so fruitful... 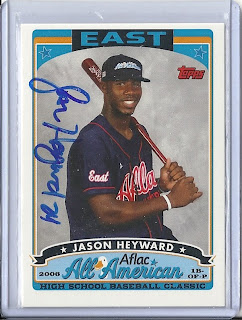 #1) 2008 Bowman Draft Jason Heyward Aflac Auto SP: Early on in 2010 I was hooked on Bowman Draft after pulling a few autos from a box of the 2009 variety. I decided to go after a box of 2008 Draft but finding one at the right price (less than $100) proved elusive. I finally gambled on a box from eBay even though I didn't really have the money for it at the time...call it hunch. About 2/3 thirds of the way through the box I hadn't pulled a single card of note until this jawdropper emerged. With Heyward's hobby star rising and the extreme rarity of this card, I was able to sell it for an unbelievable $500 dollars. The pull of a lifetime? Maybe...
Posted by The Notorious B.U.D. at 9:43 AM