Alright it's just one rainbow but it's my second in the past month so that's got to count for something (so many apostrophes in that sentence). I realize that most people have never heard of Akwasi-Owusu Ansah, but since I pulled the superfractor I was legally obligated to complete the rest of the set after starting with the most difficult card. I was actually able to track down all the cards in about two weeks thanks to some friendly eBay sellers (goodness does still exist in the heart of man--at times) and a little good luck. I think it looks pretty wicked cool altogether--now I just need AOA to turn into a superstar kick returner ala Dante Hall, or a rapper. I would listen to a rapper named AOA and I don't even like rap. Here be rainbows: 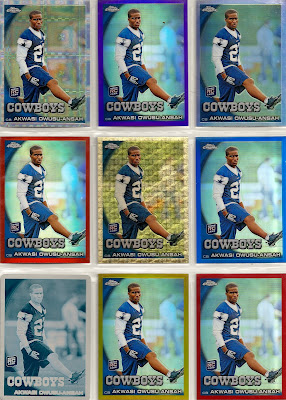