This was the first of three Black Friday boxes I ordered from Atlanta Sports Cards (all for around $33 bucks) and this was by far the worst. The box was advertised as having four packs with an "Inscribed" auto in each pack. The site warned that there were redemptions in the product, although the autos of Albert Pujols and Ryan Howard were both pack inserted, so I wouldn't have to worry about missing out on a big hit to passed deadline. I figured I might pull a redemption, but I certainly wasn't prepared for what happened:

Billy Wagner Auto Redemption (x2) and Ryan Wagner Auto Redemption (x1): That's right, out of four packs I pulled three redemptions all of players with the last name Wagner (better than running into a Baldwin brothers box but still...) Technically these redemptions never expire but since Fleer went out of business I might have a tough time getting the cards in hand. I'm thinking of sending one of the Billy Wagner redemptions for a TTM. How cool would that be? 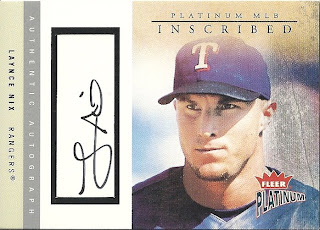 Laynce Nix Inscribed Auto #156/200: The last pack in the box finally delivered an auto, although not the Albert Pujols I had been dreaming of. Nix has carved out a career as 4th outfielder but never quite lived up to his enormous potential. Apparently the Mariners are looking to sign Nix to provide some depth of thier bench, so expect a terrible year from him in 2011. It's the Mariner way. On a side note the autos are well designed, though that doesn't really ease the sting of going one for four, and yes I know I should be used to that after my high school baseball career. 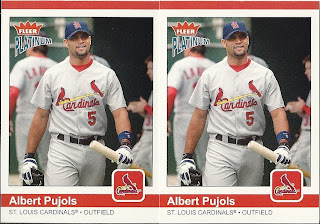 Hit of the box: Double Pujols. I'm just going to leave that one alone.

Overall Thoughts: As a riverboat gambler (I've wanted all my life to have this title despite the fact that I take very few risks. I'm also hoping I can get the nickname "Night Train" to stick) I'm used to big wins and stinging defeats. This was definitely the latter and is a good reminder of the dangers of buying old wax. Of course most new products stink so collectors are really caught between a rock and a hard place. The box was pretty boring to open because there weren't any inserts other than the autos and the collation was terrible. I probably will steer clear of this in the future, but then again, how could I possibly do worse? Stay tuned for the next two boxes; I promise they won't be this bad.
Posted by The Notorious B.U.D. at 9:40 AM