I've busted a boatload of 2010 Topps Chrome Football retail this year and done awfully well. My top pulls include a Ndamukong Suh SP Variation (sold for $16), Sam Bradford X-Fractor (sold for $11) and a Dez Bryant Orange Refractor (sold for $7) in addition to a bevy of rookies and refractors (which will sell nicely as a lot). Sure I'm not making money, but anytime you can break close to even on retail is a victory, and I've got lots of nice cards for my PC to boot. Last week I grabbed a blaster and promised myself I would stop buying Chrome retail if I pulled an auto (like that would happen). Sure enough, I did, and a good one too. While Dexter McCluster is hurt right now, he flashed some exciting potential during his time on the field, and looks like a big part of the Chiefs turnaround. I was awfully happy with my Run DMC auto but it doesn't compare to what I pulled from my hobby box of Chrome--stay tuned for that! 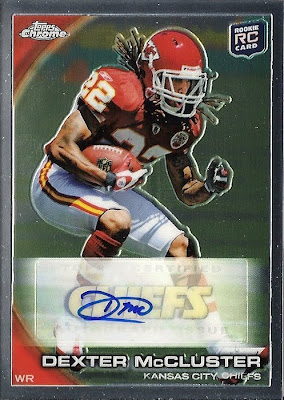 2010 Topps Chrome Dexter McCluster Rookie Auto
Posted by The Notorious B.U.D. at 10:09 AM