I was looking to add an inexpensive box to the order for Brian and Bud's Box Busting Bonanza (stay tuned for the sequel sometime in the future) to get free shipping from Blowout and after some substantial hemming and hawing, decided on a box of 2010 Topps Chrome Football. I wasn't counting on much, but as it turned out, I pulled what will probably be a once in a lifetime hit. Here are the two cards worth mentioning: 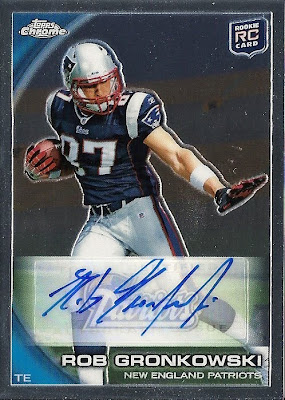 Rob Gronkowski Rookie Auto: Though I didn't hit an auto from the scarce Group A I was still lucky enough to pull one of the better autos from Group B. Rob Gronkowski was the Patriots second round pick and had a monster game last night, hauling in three touchdown passes against the Pittsburgh Steelers. Not bad, but not nearly as a cool as... 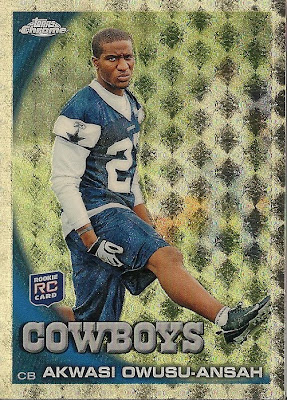 Akwasi Owusu-Ansah SUPERFRACTOR Rookie: I thought I might go my entire collecting lifetime without ever pulling a superfractor, and that scared me (not really). Considering how difficult they are to pull, and how few products they are in, it was a very real possibility. But then, in the third pack of my second football box ever, I saw Akwasi Owusu-Ansah glaring at me from this gold-bordered beauty. The card looks amazing in person and is one of the few one-of-ones that lives up to the hype. I realize that Akwasi Owusu-Ansah isn't the most highly collected player out there, but it doesn't diminish the value of this card to me, and makes it easier to keep it in my personal collection indefinitely. 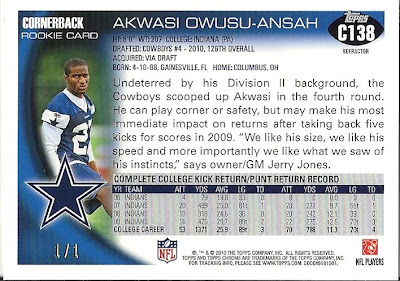 Overall Thoughts: Well, anytime you pull a superfractor, I think you are legally obligated to give the box a thumbs up. 2010 Topps Chrome football definitely looks better than the baseball edition and at only $40 a box, it's not a bad gamble for a chance at a Bradford, Tebow or in this case, superfractor. Thanks to this box, I can cross another collecting goal of my list. Next up: a cut autograph!
Posted by The Notorious B.U.D. at 10:12 AM