I actually pulled this from a blaster of Platinum last year but didn't post it because Dwayne Bowe was playing awful and I'm fairly lazy (at least when it comes to blogging). This season has been a completely different story as Dwayne Bowe has become a fantasy monster, scoring touchdowns in seven straight games including three against the Seahawks over the weekend. He's the major reason why my fantasy team (Vick's Vapor Rubs formerly known as Korn on the Kolb) has turned an 0-4 start into a 7-5 record and a shot at a first round bye in the make believe playoffs (depending on this weekend's outcome). The least I could do to thank Mr. Bowe for his contributions to my team is show off this great looking card: 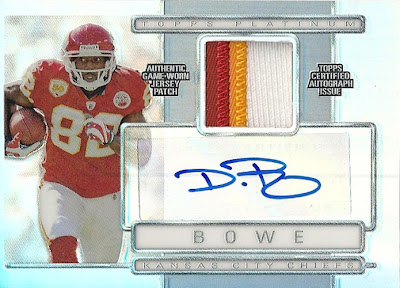