Give a Hoot: Trade with Night Owl

What can you say about Greg from Night Owl Cards that hasn't already been said? The man is omnipresent in the baseball card blogosphere, a larger than life figure who transcends collecting yet still interacts with mere mortals such as myself. The driving force behind the creation of this very blog, the humble Night Owl refuses too take any credit (who can blame him, have you seen my grammar?) for his influence in the baseball card world, but has been behind every major innovation since the 1980's (the game-used jersey? His idea. Topps Ticket to Stardom? Not his idea). Anyway, Greg took a break from balancing the Earth on his shoulders, and sent me some Mariners, Griffeys and miscellaneous other cards I collect. He mentioned that a recent box of his contained a couple of hits I would enjoy, and as soon as I saw an envelope in the mailbox with a NY address I knew something good was in store. Check it out! 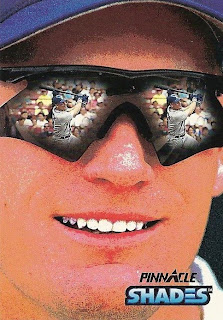 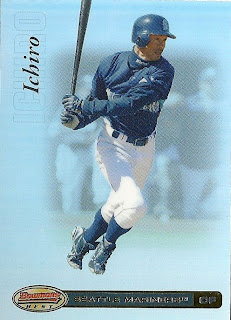 2007 Bowman's Best Ichiro Suzuki: If I held a contest to see which one of my base cards was the thickest, this card would win, and it wouldn't even be close. A shiny Ichiro is always appreciated, especially from a product that I have never opened. 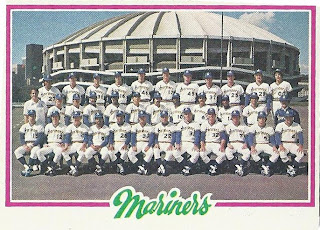 1978 Topps Mariners Team Card: Greg sent me a bunch of '78 Topps M's, and I am sad to say that I didn't recognize any of the players (although I did enjoy a hearty laugh at the expense of Dick Pole). This card however, features the unmistakeable Kingdome in the background. I went to quite a few games there when I was a kid and was really sad to see it go, a lot of good memories in that building (see: 1995 Mariners). 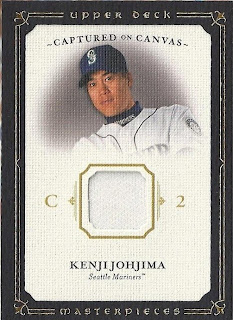 2008 UD Masterpieces Kenji Johjima Jersey: This is the first of the hits from Greg's box that was actually destined for me. UD Masterpieces are absolutely beautiful cards, and it would be tough to find a better designed relic than this one. Sadly, Kenji took off for Japan after four years in the States (I'm not so sure he wasn't forced back) during which he had mixed results with the Mariners. He looks like a turtle, but I liked him anyway. 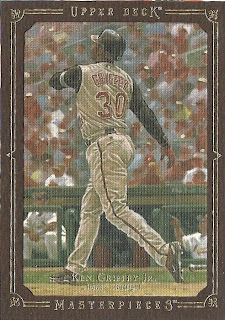 2008 UD Masterpieces Ken Griffey Jr. Brown Border #27/100: Wow! This is easily my favorite card from the trade, a sweet numbered parallel of Junior with a great painting of the sweetest swing in the sport. I really wish UD would bring back Masterpieces, it was one of my favorite sets of the past few years.

Thanks for the tremendous trade Greg! Sorry you ended up with my box, but thanks for sharing the M's goodness with me. Expect some Dodgers in the mail soon!
Posted by The Notorious B.U.D. at 8:53 PM