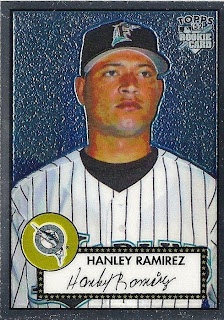 A few weeks I was browsing my local Shopko and found some 2006 Topps '52 in the power packs bin. I always liked the design of the cards and figured that for $1.59 I might as well take the plunge. I got six packs total and pulled some decent rookies (Melky Cabrera, Nelson Cruz, etc.) and three chrome parallels numbered to 1952 (Tom Gorzelanny RC, Albert Pujols, and the card shown on the left). At first I simply dismissed the card as some rookie that never panned out because I didn't recognize the image, but on my second go-round I realized that the card was supposed to be a rookie of the Marlins sensational shortstop Hanley Ramirez. The back of the card states the following:

"This spectacular rookie batted and ran opponents into submission in 2006, finishing with a .292 batting average, 46 doubles, 11 triples, 17 home runs and 51 stolen bases. The Marlins leadoff whiz reached base in 36 consecutive games at one point, and was better in September--.352 AVG and .623 slugging percentage--than any other month."

Sure enough, those are the numbers from Hanley Ramirez's rookie season in Florida; so I had pulled a numbered rookie of one of the NL's best players. But then who is the player actually featured on the front of the card? How could Topps make the mistake of putting the wrong picture on a card of such a highly touted player as Ramirez? It's not the first time such a thing has happened to Topps (see: Carlos Beltran's RC), and while Florida isn't the biggest baseball market in America, this player doesn't look even remotely like Ramirez. An otherwise great card is ruined by a lazy mistake, but I suppose it did give me a story to tell.

Does anyone know who the player featured on this card is?
Posted by The Notorious B.U.D. at 11:26 AM