Alright there's only one rainbow to show off today but this is my third in the past few months so deal with it. I've been working on this particular rainbow for about six months and had managed to track down everything except for the x-fractor, which with 199 copies, should not have been that difficult to find. I was worried that it might not even exist (a conspiracy no doubt!) Thankfully, someone on Blowout Cards pulled one from a box recently and was kind enough to sell it to me. The rainbow looks great in person and I am expecting big things from Michael Saunders in 2011. Thanks for looking! 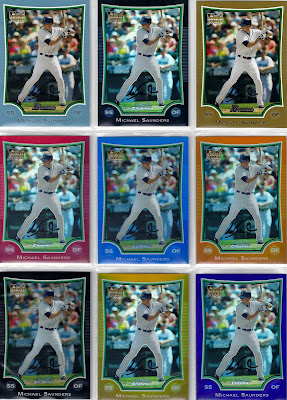 They're always after me lucky charms!
Posted by The Notorious B.U.D. at 2:57 PM