Everyone has seen 2011 Topps ad nauseum so I'll just show the highlights from the first batch of packs I grabbed: 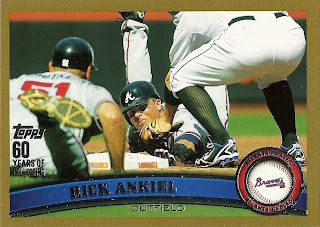 Rick Ankiel Gold Parallel #392/2011: Can't complain about pulling a parallel of a PC player even if I'm not a huge fan of the photo. I'm hoping that Ankiel has a good bounce back year with the Nationals this season, but regardless of what happens, he's had a pretty remarkable career.

Ricky Romero/Aubrey Huff/David DeJesus Diamond Parallel: I love the addition of the diamond parallels to this year's Topps set. It's great to pull something shiny and they are reminiscent of some of the gaudy inserts of the 90's. I'm definitely going after the Mariners team set of these parallels. Outstanding! 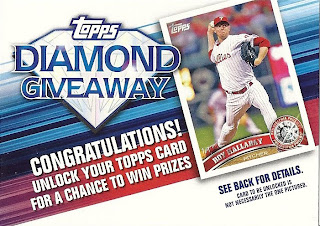 Roy Halladay Diamond Giveaway Code Card: I was a little disappointed to only pull one giveaway card from 12 packs and even more disappointed when it turned into a 1994 Mike Schooler. Things only got worse though as I pulled another giveaway code from a different set of packs and that turned into: a 1992 Topps Mike Schooler!! Way too much school!! Still, I like the promotion, even if it doesn't seem to have as many good cards as last year. 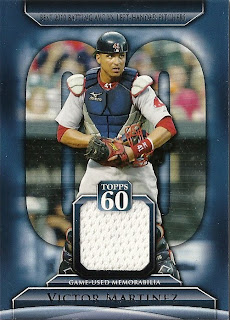 Victor Martinez Topps 60 Game-Used Something: I guess I should be excited to pull a hit but Topps' language is so nebulous that the piece of "memorabilia" on this card could have been worn by me. Not only is it not from "any specific game, event or season" but it doesn't even metion that it was worn by Victor Martinez. I like the design but don't want to feel like I'm getting bamboozled by the shady practices of our only card manufacturer. Step it up Topps.


Overall Thoughts: It's Topps. It's good. I'll buy more. Thanks for looking!
Posted by The Notorious B.U.D. at 9:11 PM