I found this box at a local Shopko for $59.99 (not terrible considering Blowout Cards has the boxes for $45-50) and bought it on a whim after getting some good news. I wasn't expecting much from the box with it being one of Upper Deck's last baseball products but I was pleasantly surprised with my pulls and the quality of the product. Here's the goods: 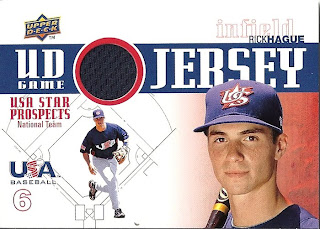 Rick Hague Team USA Jersey: The basic jersey cards are well designed and it's always nice to get a something other than the standard white swatch. I'd never heard of Rick Hague before but he had a pretty good season in the minors after being drafted by the Nationals in the third round of the 2010 draft, hitting .327 at Single-A Hagerstown. 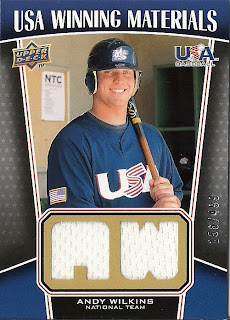 Andy Wilkins Team USA Winning Materials #156/499: It's almost impossible to tell in the scan, but the left swatch of jersey shows some dirt from game-use, which is always a plus. Wilkins was a 5th round pick of the White Sox in last year's draft and hit .307 with more walks (33) than strikeouts (31) at Rookie League Great Falls. 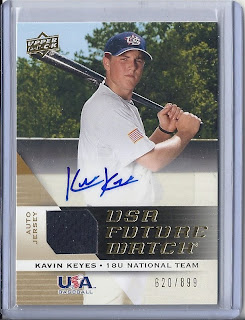 Kavin Keyes USA Future Watch Jersey/Auto #620/899: The auto/jersey cards fall approximately one per box and I was (un)fortunate (we won't know for a few more years) enough to pull Kavin Keyes of the 18U squad. The card looks crisp and although the autograph is on a sticker it blends nicely into the background. Keyes is attending college at Oregon State and hopefully this card will one day pay for a meal...at a sit down restaurant! 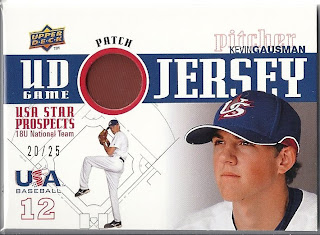 Kevin Gausman Team USA Jersey Patch #20/25: I opened one pack and was greeted by a card thicker than most Red Robin hamburgers--it turned out to be a patch variation of Kevin Gausman. Yes it's the dreaded one color patch, but at least it wasn't white, and the red completed the American Flag (red, white and blue) in jersey cards. Gausman was drafted in the 6th round by the Dodgers but didn't sign and will instead pitch for LSU. He seems to be fairly highly regarded so this might not be a bad pull at all. 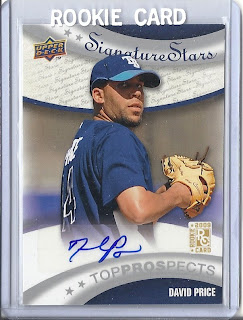 David Price Top Prospects Auto RC: I had already received my four promised hits with a few packs remaining, so I was very surprised when I pulled this card. He's no Bryce Harper, but David Price was one of the top autos from the rookie subset, and I'll never complain about an extra hit. The upper right hand corner is a bit dinged but it's a great card nonetheless.


Overall Thoughts: I got pretty lucky on this box with an extra auto and a likely case hit (the patch) but for $40-45 dollars this is a fun product with an insert in nearly every pack and a decent shot at a big hit (Bryce Harper, Manny Machado, Matt Weiters). If you get the urge to open something other than 2011 Topps Blasters this is a great, albeit more expensive, way to go.
Thanks for looking!
Posted by The Notorious B.U.D. at 9:13 PM