Trade with Kerry from Cards on Cards

This is a long overdue trade post from a swap I completed weeks ago with Kerry from Cards on Cards. In my defense, I was trying to purchase a scanner so I could improve the quality of my posts, but had trouble finding a model priced right. Eventually I just caved and got an HP All-in-One, and these cards were the inaugural scans. Kerry lives in my neck of the woods (Pacific Northwest), but is a Cardinals fan, and I've got plenty to spare. In return for some St. Lunatics, Kerry sent over some Mariners, Griffeys and Roy Halladays. Here are some of my favorite from the trade: 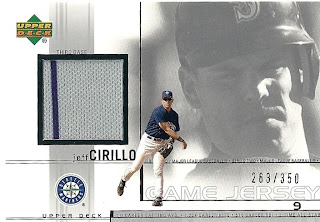 2002 Upper Deck Jeff Cirillo Game Jersey #263/350: Despite having a successful career with the Colorado Rockies and Milwaukee Brewers, Jeff Cirillo never cut it as a third baseman for the Mariners, failing miserably at the plate in his two seasons in Seattle. I still like the card though, because it came from a time when jerseys were still difficult to obtain, and it features a nice large swatch of jersey (even if it does have a Rockies' pinstripe). 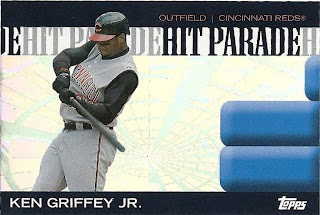 2006 Topps Hit Parade Ken Griffey Jr: Kerry actually sent over two Griffeys from this insert set, this card in a grey reds jersey which showed Junior second on the active career HR's list, and another which showed the Kid second the active career RBI's list (both second to Bonds). I always liked these inserts and was a little disappointed that Topps discontinued them. Shiny Griffey always = success! 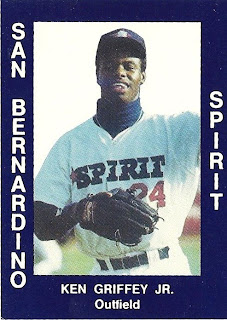 Ken Griffey Jr. San Bernardino Spirit Oddball Card: Kerry also sent over a bunch of unlicensed, oddball Griffeys from his early days with the Mariners, and in this case, the Spirit of San Bernardino. There was a glut of oddball Griffeys back in the early 1990s when his popularity was at its apex, and I always enjoy cards of him from his short stint in the minor leagues.

Thanks for all the great cards Kerry and sorry it took so long for me to get them up (and sorry about the NL Cy Young debacle). I will be sending some more Cardinals your way soon!