A Surprise Visit from the Doctor 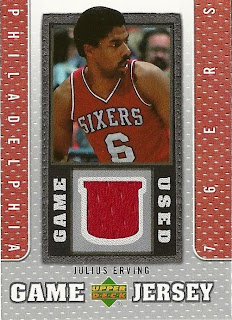 Anyone who has collected cards for a while knows the wonderful phenomenon that is "power packs". Crammed together in a tiny box these packs are usually a couple of years old and generally priced at just a $1.59. For collectors they are a great, inexpensive way to fill their needs for a set, or maybe just a chance to pick up some packs they wouldn't consider paying full price for. Personally, I used power packs as an opportunity to grab some football or basketball cards in order to avoid getting burned out on baseball (not possible, but there's no harm in being cautious). So, while at Target the other day, I picked up a few power packs, including one 2006-07 Upper Deck Basketball.

Not expecting anything from the pack, I opened it quickly and was dismayed when I saw what I believed to be a cardboard dummy. Upon closer inspection, it turned out the thick slab was actually a jersey card...and a very good one at that. Staring back at me was none other than the greatest dunker to ever grace the face of this earth, Julius "Dr. J" Erving. Needless to say, I was speechless. Most jersey cards I have pulled were of average to below-average players that left me with a "meh" feeling. Even though I don't have as much exposure to the history of basketball as I do baseball, you would have to be living under a rock to not see Dr. J's influence in today's NBA; the man is a true living legend and thanks to one very powerful little pack, I've got a piece of his jersey. How cool is that?
Posted by The Notorious B.U.D. at 6:16 PM