I fell in love with Topps Platinum last year when I pulled not one, but two, patch/autograph cards from blasters of the product. Though I don't but nearly as much football, baseball cards are a wasteland right now (unless Target starts carrying Triple Threads) so it was a no-brainer to grab a couple blasters (keep in mind I am just showing the best of multiple blasters) of Platinum. While I didn't pull a patch this time around, I was still happy with my blaster: 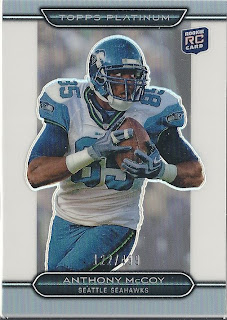 Anthony McCoy White Refractor RC #122/499: As a part-time Seahawks fan (I also follow the Titans and Packers) I was happy with this pull, even though McCoy is yet to produce on the football field. The refractors in this product look amazing in person and the rarer white refractors are just jaw dropping. I would recommend picking up some of these off eBay of your favorite team--refractors are one thing Topps does right. 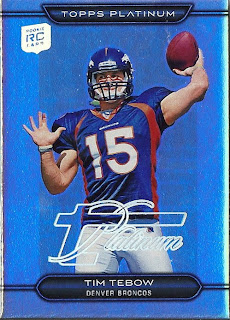 Tim Tebow RC Variation SP: Well, I pulled a card of the "it" guy, even if we don't really know what "it" is. I'm not sure what to make of Tebow yet, I'd like to see him succeed, but I just don't know if he will ever be a top tier NFL quarterback. In the meantime, his cards have a good resale value, so I've got that going for me. 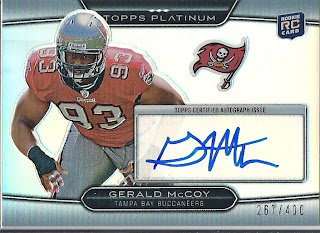 Gerald McCoy Rookie Refractor Auto #267/400: It only took (x) blasters, but I finally pulled my first auto from this year's Platinum. Gerald McCoy is set to become the next Warren Sapp (he's already got a preliminary agreement to join Dancing with the Stars in 2020) after he was drafted 3rd overall by Tampa Bay. This card hails from Group A, which is the most difficult group at over 1:300 packs. Defensive lineman don't usually sell that well, but it's still a nice card.

Thoughts: Though I wasn't nearly as lucky with Platinum as last year, I still enjoy the product and it offers some huge hits for retail. My advice? Try one blaster and see if you can't catch lightning in a bottle. Thanks for looking!
Posted by The Notorious B.U.D. at 12:42 PM