My brother and I both ordered a box of 2009 Bowman Chrome to bust as a last hurrah before he took off for college. For around $50, you got a boatload of shiny cards and an on-card autographed prospect. The checklist is decent (the big names include Freddie Freeman, Tommy Hanson and Carlos Santana) and with so many parallels there's rarely a dull pack in the box. My brother was lucky enough to pull a Santana auto, here's what I got: 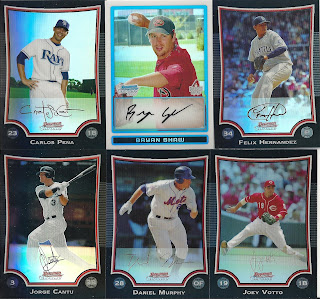 Carlos Pena/Felix Hernandez/Bryan Shaw RC (#/500)/Jorge Cantu, Daniel Murphy and Joey Votto Refractors: I like the design of both the veteran and prospect cards and they really pop with the refractor finish. I was happy to pull the Felix as I already had his blue refractor and x-fractor from the set. 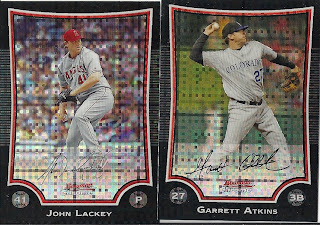 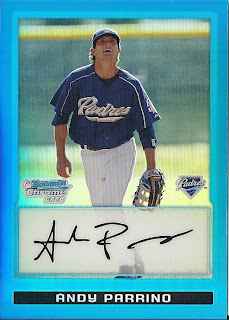 Andy Parrino Blue Refractor RC #/150: The blue refractors in this set are simply beautiful, which is good, because Parrino is currently hitting .249 in Double-A. But seriously, if I didn't have a girlfriend, I would consider dating one of these blue refractors. 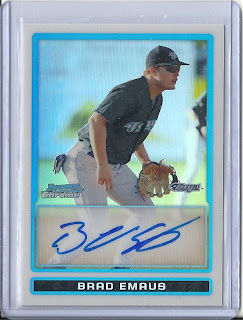 Brad Emaus Rookie Refractor Auto #200/500: While Brad Emaus isn't one of the big name prospects in the set, he's putting up some solid numbers in the minor leagues, and it's always nice to pull a refractor auto. Emaus is a second/third baseman in the Toronto system with a season line of .290-15 HR's-75 RBI's-.397 OBP between Double and Triple A. Next year's Brennan Boesch perhaps?

Overall Thoughts: Despite the fact that I didn't pull one of the top autos, I was still very happy with this box and would probably consider getting another. With 10 refractors in my box, including a prospect auto, I've got plenty of trade bait moving forward and the high quality base cards seem like inserts themselves. If you can find a box of 2009 Bowman Chrome for between $50-60, I would give it my seal of approval. Thanks for looking!
Posted by The Notorious B.U.D. at 11:31 PM